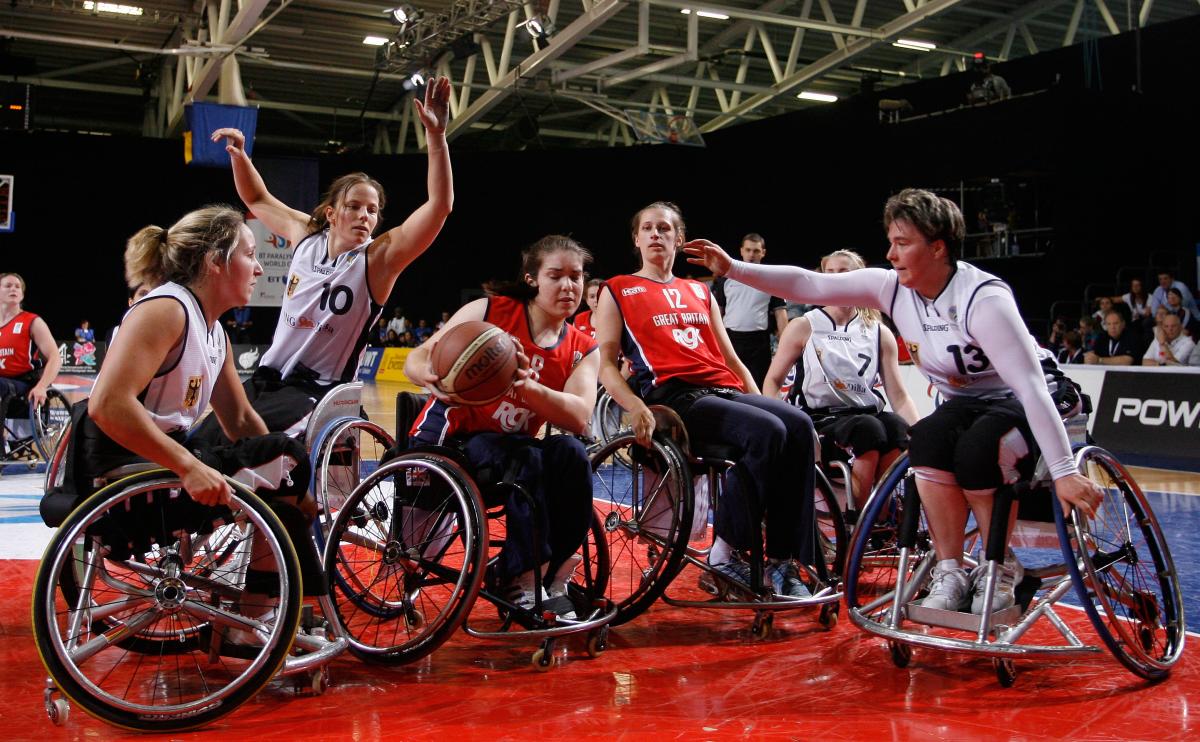 The Great Britain women’s Wheelchair Basketball team were crowned champions of the BT Paralympic World Cup for the first time when they beat Germany 63-52 in the final.

In front of a packed out crowd at the Manchester Regional Arena, GB were enigmatic in defence and equally unforgiving in attacking the basket with Helen Freeman top scoring with 22 points while Amy Conroy and Laurie Williams were also in double figures as they hit 16 and 11 respectively. Germany were led by Gesche Schunemann, who posted 18.

The GB team out rebounded their German opponents and the depth in their bench, which has been a common theme throughout this tournament, saw them storm to a commanding 15-point lead by half-time, and it was a lead they didn’t surrender for the remainder of the game.

Head coach Garry Peel said, “After last night’s performance this feels great. I said to the girls just be in control of the game. We started attacking the basket and seemed to be happy with that but I told them to keep going.

“We had to get people in and out. Amy (Conway) got in foul trouble straight away, which gave us the opportunity to mix it up and play different people depending on what we needed on the floor. But as I said to them, we only made one mistake in the first half.

“This year we have the Europeans next and also the first ever World Championships for the under 25s; we have six girls in this team who will be there. Our goal is top four in 2012 but that’s still so far away, for now we just have to take it one step at a time.”

Freeman added, “We have a lot of young players in this squad and it’s perfect timing as they are all coming through now. Germany will be back I have no doubt about that as they are always strong. We just came out knowing we could do it today. It’s amazing to win as I’ve never won at this tournament before I don’t think we (GB) have either.

“Germany are second in the world so now we feel like we can beat anyone. It wasn’t easy though but we just had a self-belief we could win.

“To score yourself is always good but to get the win is the most important thing. Because I was hitting it, it then it started to open up opportunities for other people, which helps us all around.”

Unsurprisingly it was Freeman, who has dominated the paint for Britain this week, who opened the scores with a clean lay-up. And from there GB and Germany alternated baskets with as much speed as they showed up and down the court, but it was the host nation who ended the period with a slender 16-15 lead.

Freeman only had to wait until four minutes into the second quarter to enter double digits, when her basket took her to ten and Britain to a five-point cushion at 22-17. They extended the difference when first Freeman turned provider, setting up Helen Turner and then she added to her own tally. A pair from the free throw line for the University of Illinois student, bucket from Louise Sugden and shot off the glass for Turner saw GB’s 10-point run put them in a commanding position going into halftime, with them asking Germany to respond to a 36-21 lead.

And it took Germany over two minutes of the third quarter to find an answer as GB continued to lock them out. Having picked up an early three fouls in the first half, Conroy returned to the floor and immediately cancelled out the German basket. And once the gates had opened Britain came flooding in, in the form of another six points which saw them stretch a game-high 19-point lead.

A couple of German buckets managed to weather the storm, but where in previous games Freeman had been the driving offensive force this time GB were very much a double-pronged attack, with Conray on target to match Freeman’s 14 points and see her side 46-32 good at the end of the third.

And it was perhaps apt that WNBA side, the Atlantic Dream, who are in Manchester for a game on Sunday, were introduced to the crowd before the fourth period because GB were very much living the dream on the court in their quest for a first gold at the BT Paralympic World Cup.

Freeman is no stranger to American basketball either, as a student of the University of Illinois, and she had definitely been a firm friend of the free throw line during this week’s tournament so there was little surprise that she calmly and assuredly slotted a pair home early in the fourth.

Gada Jammoul was ejected from the game with four minutes left to play and Germany’s frustration was clear as Great Britain continued to break down plays and rack-up the defensive rebounds. Each time Germany shot there would be at least one red jersey under the basket waiting to pick off the leftovers, while GB were also sure to keep them away from the charity strip.

As the final minute ran down GB broke away and Conray played it off the glass. Germany responded before they fouled Freeman who made one for two from the free throw line. Mareike Adermann was the second German to foul out when she picked up two in quick succession, the first on Sugden who made one for two and then on captain Claire Strange who hit one. Schenemann added a basket to take her personal to 18 but the effort was in vain against a British team who had dominated this final from the very start.

The GB men’s team will face Brazil in the bronze medal play off later today.