Hat-trick of wins for George, Van der Horst in Mannheim

The Belgian and Dutch riders swept their events at the three-star competition in Mannheim, Germany. 16 May 2016
Imagen 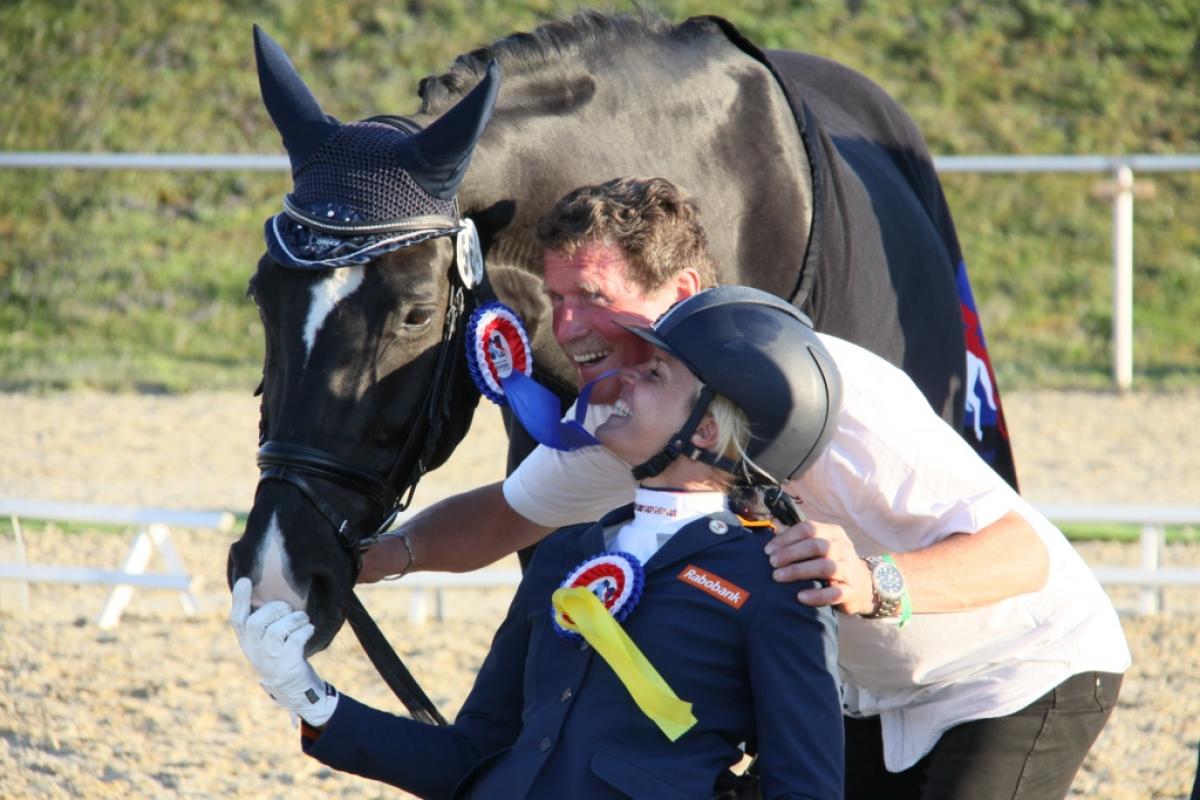 The Netherlands' Nicole Den Dulk won the grade Ib individual test on her horse Wallace N.O.P. at the three-star Para equestrian dressage competition in Mannheim, Germany, in May 2016.

ⒸMannheim
By Rob Howell | For the IPC

Reigning world champions Michèle George and Rixt van der Horst went three-for-three at the latest three-star Para equestrian dressage competition of the season, held in Mannheim, Germany, from 6-10 May at the city’s May Market Horse Show.

Riding FBW Rainman, the Belgian George won the grade IV team, individual and freestyle titles. In the individual test, the two-time London 2012 Paralympic gold medallist scored 75.516 per cent to finish ahead of Denmark’s Line Kongensgaard and Switzerland’s Nicole Geiger, who finished second and third, respectively. In the freestyle, George scored 75.200 per cent ahead of Norway’s Tonje Lundqvist, followed by Kongensgaard.

After the freestyle and individual competitions, George wrote on Facebook: “Another grand slam! He was a little tense because of some nasty noises outside the arena but still a great victory – I couldn’t dream of better.

Van der Horst’s victories came on her horse Caraat. Having picked up the team test win, the Dutch rider scored 72.190 per cent in the individual test ahead of Denmark’s second-place Caroline Cecilie Nielsen and Germany’s third-place Britta Naepel. In the freestyle, Van der Horst scored 75.800 per cent to finish ahead of Naepel and Dutch teammate Steffen Zeibig, respectively.

In the grade Ia, Germany’s Elke Philip took the individual test on Regaliz (72.971 per cent) ahead of Italy’s Sara Morganti and Norway’s Jens Lasse Dokkan. Morganti, who won the team test, bounced back to take the freestyle title on Royal Delight, scoring 76.600 per cent ahead of Philip; Dokkan was third.

Places were swapped in the grade III contest with the Netherlands’ Sanne Voets and her horse Demantur taking the individual title with 72.276 per cent. Denmark’s London 2012 medallist Anikka Lykke Risum (76.600 per cent) took the freestyle, ahead of Voets on Aros A Fenris. South Africa’s Philippa Johnson-Dwyer was third in the grade’s individual test, with the Netherlands’ Lotte Krijnsen third in the freestyle.