The 2015 IPC Athlete Classification Code was one of a number of motions approved by the IPC Membership. 15 Nov 2015
Imagen 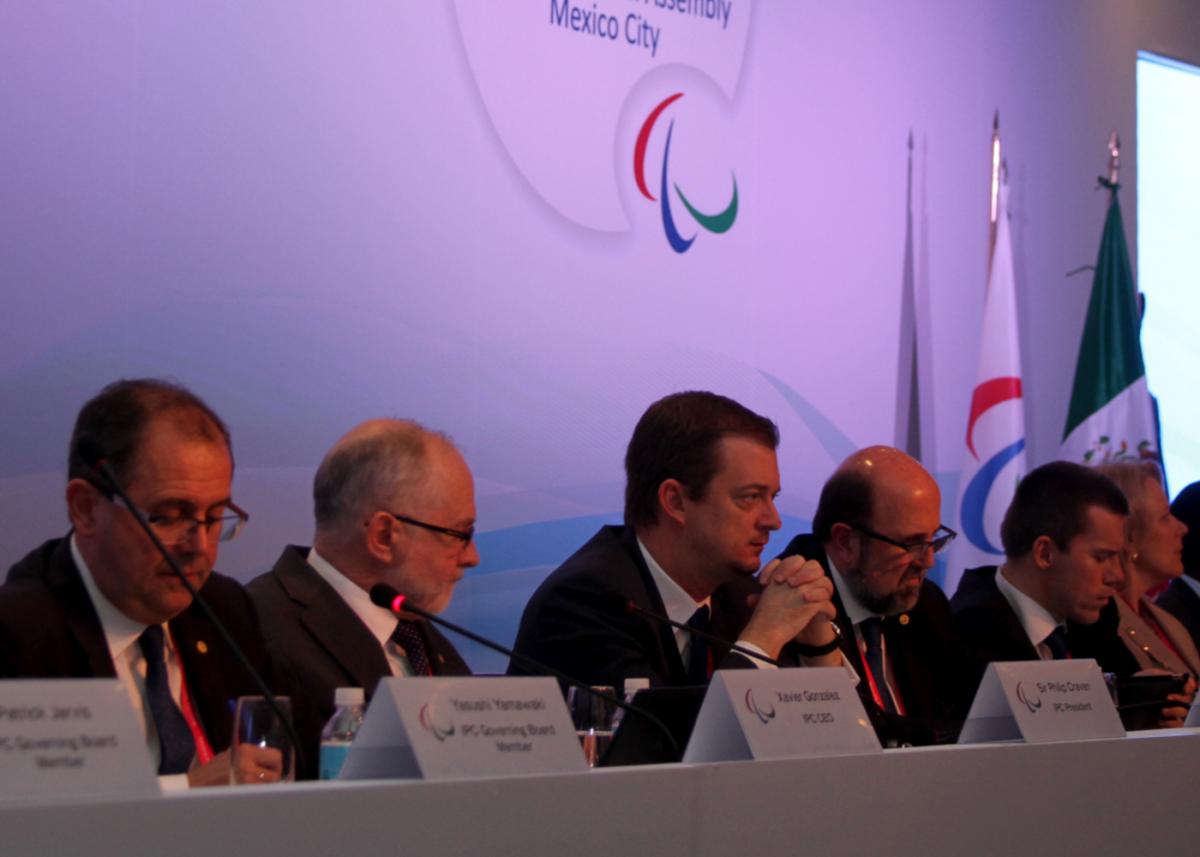 Members of the IPC Governing Board sit at the 2015 IPC General Assembly in Mexico City.

During the morning session, IPC President Sir Philip Craven presented the IPC’s Biennial Report which highlighted the growth and breadth of the Paralympic Movement’s work in the last two years.

He paid testament to the work of those who had contributed to the Paralympic Movement’s ongoing success.

“I would like to thank the IPC membership, IPC management team and all volunteers for playing their role in the making the Paralympic Movement the strongest it has ever been,” said Sir Philip.

“The priority now is to use the new IPC Strategic Plan to build on these foundations.

“Together, we must deliver a hugely successful Paralympic Games in Rio next year and show to the world that Beijing 2008 and London 2012 were not exceptions, but the norm.

“We must also continue to engage more people around the world in the Paralympic Movement, either as participants in para-sport, TV viewers at home or spectators in venues.

“Only by more people getting involved in what we do and what we deliver on a daily basis can we help fulfil the IPC aspiration: “To make for a more inclusive society for people with an impairment through para-sport.”

During the full-day event, a number of motions were approved by the IPC membership, including the 2015 IPC Athlete Classification Code.

Effective from 1 January 2017, the new Code is more athlete focussed and accessible. More than 2,700 comments were received during three rounds of consultation with stakeholders which started in June 2013.

A motion put forward by CPISRA for the IPC Governing Board to consider a 23rd sport for the Tokyo 2020 Paralympic Games was defeated.

The IPC General Assembly also approved the membership of nine new organisations, five of which were National Paralympic Committees (NPCs). They are the NPCs of Aruba, Yemen, St Vincent and the Grenadines, Guinea Bissau and Somalia.

It was also agreed to terminate the membership of the NPCs of Bangladesh, Somalia (an old NPC), Albania and Peru because of either their inactivity or because of a suspension that exceeds more than four consecutive years.