IPC Membership Gathering gets under way in Berlin 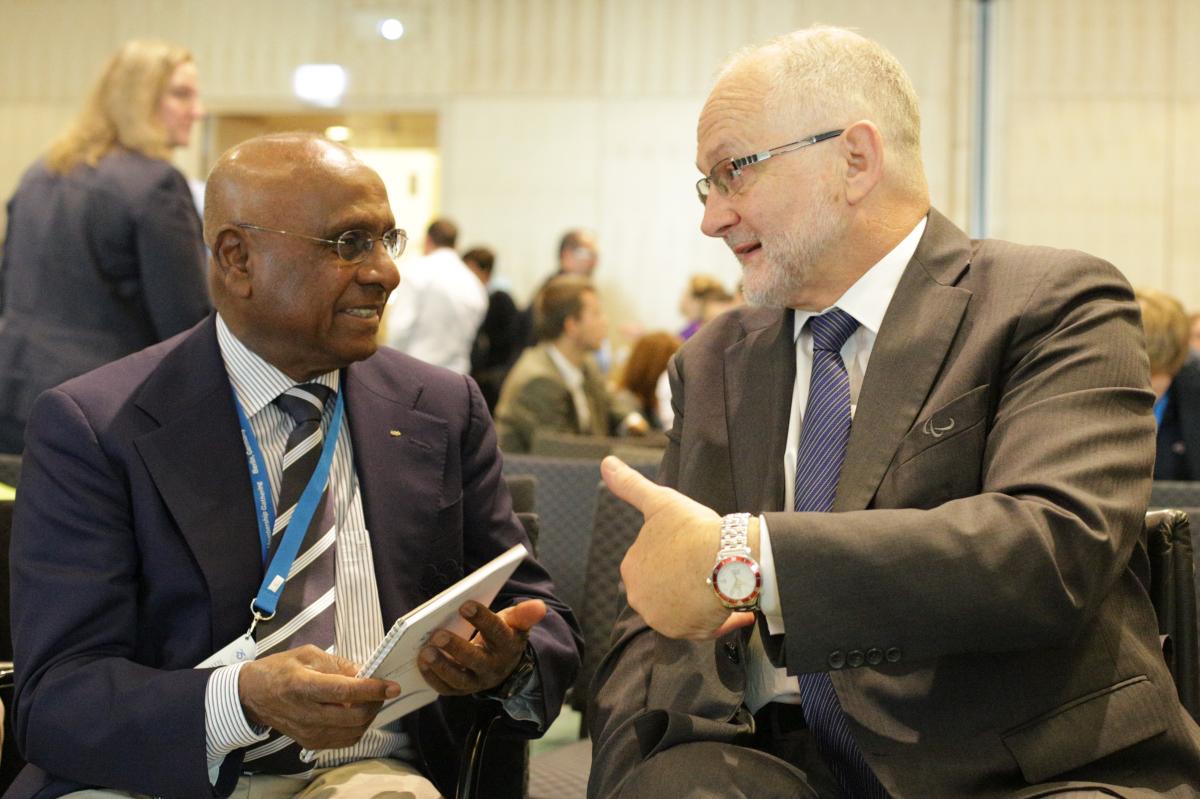 More than 260 people from around the Paralympic Movement are in Berlin, Germany, this weekend (3-5 October) for the International Paralympic Committee (IPC) Membership Gathering which opened on Friday (3 October).

The purpose of the three-day event is to celebrate the IPC’s 25th anniversary, which will be marked with a special Gala Dinner on Saturday (4 October), and discuss the future strategic direction of the Paralympic Movement.

IPC President Sir Philip Craven opened proceedings with a speech that covered the past, present and future of the Paralympic Movement’s international governing body which was formed on 22 September 1989.

“Whilst it’s important we reflect on what we have achieved together over the last 25 years, it is crucial that we listen, debate, discuss and shape where we go from here,” said Sir Philip, who was re-elected for his fourth and final time as IPC President last November.

“Together we have achieved a lot in a short space of time, but we cannot afford to be complacent and dwell on our successes so far.

“The sporting world is evolving all the time and we need to be leading the way, working together to overcome the challenges we face and take advantage of the many opportunities that are out there.”

Sir Philip spoke about the growth of the IPC, the Paralympic Games and the Paralympic Movement as a whole since 1989, and highlighted a number of the challenges the organisation has faced along the way.

The British born President referred to the “quantum leap” in athletic performances of Paralympians in recent years and thanked everybody who has contributed to the IPC’s success to date.

Sir Philip said: “Many things have changed over the last 25 years, but what has and always will make the Paralympic Movement so special is its people.

“You are the Movement, the dedicated IPC member organisations with your expansive volunteer networks who are the reason why the IPC finds itself in the position it is in today.

“So many people have contributed to the IPC’s success over the last 25 years, and every single contribution has made a sizeable difference.

“You have helped transform the IPC from a disability sports organisation in to one of the most respected and fastest growing international sports governing bodies in the world.”

Sir Philip also spoke at length about the IPC’s relationship with the International Olympic Committee (IOC) since the first IOC-IPC Agreement signed in 2000.

“Key to the growth of the Paralympic Games in the last 25 years has been our partnership with the IOC,” said Sir Philip.

“The ‘One Bid, One City’ Agreement signed in 2001 has firmly established the Paralympics as part of a 60-day festival of sport alongside the Olympics.

“Where we are now with the IOC is a long way away from late 2002 when, I had to go and see IOC President Jacques Rogge and ask for a loan of one million US dollars, just to keep the IPC functioning whilst also permitting some limited investment.

“Today the IPC is financially stable, having generated record revenues in 2013, and is close to paying off the loan to the IOC,” he added.

They are consolidating the growth of the Paralympic Games; increasing the number of people practicing para-sport at all levels around the world; improving the quality, quantity and profile of para-sports in between the Games and protecting the IPC’s identity.

“We must never lose what makes the IPC and Paralympic Movement so special, sacrificing what has led to so many years of success,” said Sir Philip who challenged members to take the IPC vision “to enable Paralympic athletes to achieve sporting excellence and inspire and excite the world,” to the next level.

“Over the next three days here in Berlin, in the many sessions you will be involved with, I want you to keep at the forefront of your mind how we can take this vision a step further and how we can all inspire and excite the entire world,” he said.

After Sir Philip’s opening address, Sam Ramsamy, IOC delegate member to sport for athletes with a disability, gave a view on the IOC’s relationship with the IPC.

“The IOC and the IPC have a partnership agreement continuing until 2020. I am certain that this agreement will again be renewed for a further period.

“The IOC provides support for the IPC as a fully-fledged international sports organisation, not a disabled organisation.

“This includes financial and VIK contributions. Further, the IOC has made it obligatory within the Host City Contract that the city elected to organise the Olympic Games will also host the Paralympic Games.

“Therefore the host city election procedure integrates the requirements of the Paralympic Games.

“We believe that such close working relationships enhance the quality and the world-wide recognition of the Paralympic Movement. Of course such recognition is also due to the commitment and dedication of your leaders since the founding of the IPC.”

The IPC Membership Gathering will continue until Sunday lunchtime, and outcomes from the event will help shape the next four-year IPC Strategic Plan which will be published in early 2015.