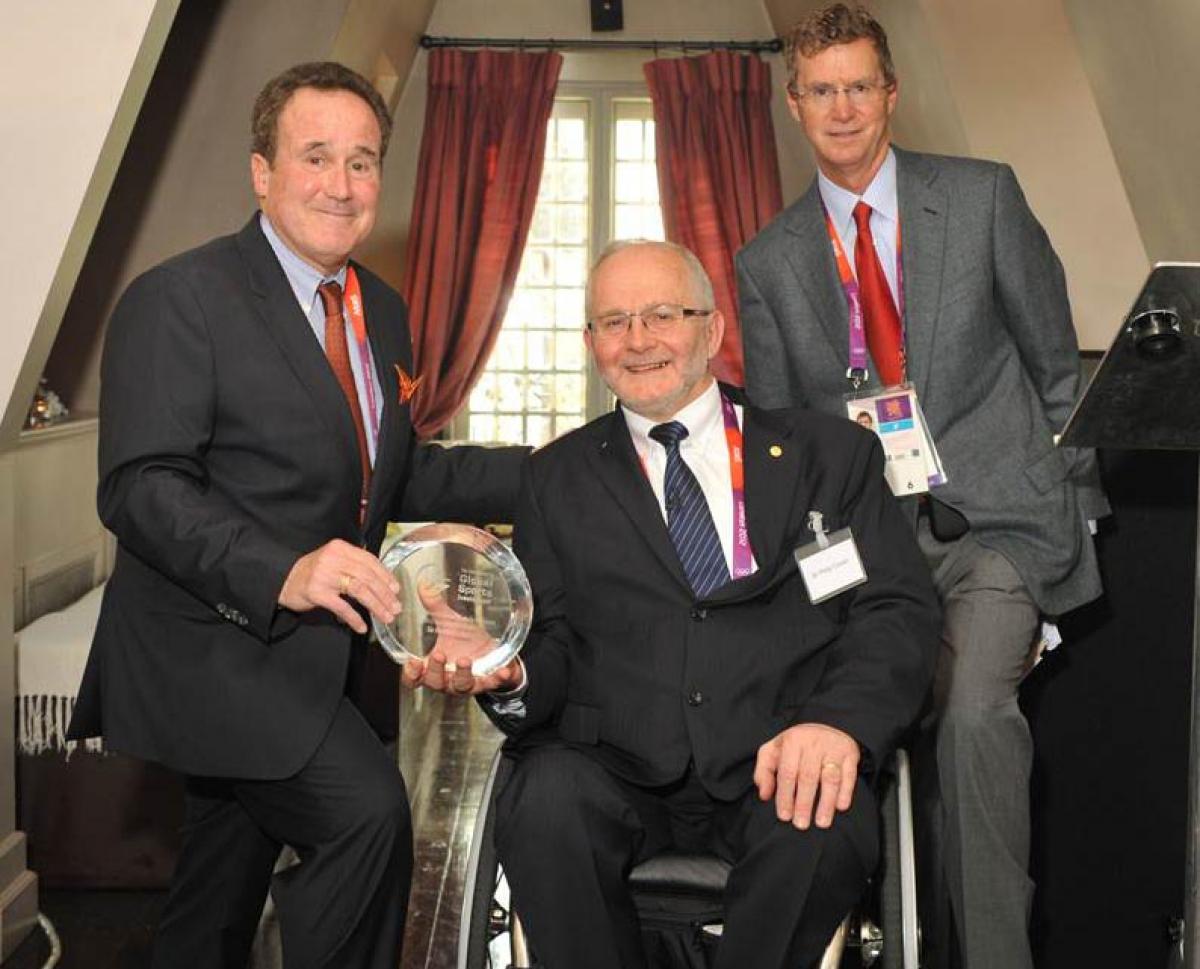 “On behalf of the whole Paralympic Movement I would like to say how grateful I am for the $100,000 grant which I will donate to the Agitos Foundation for use in funding youth development initiatives in the Americas.”

As 2012’s honoree Sir Philip was awarded a $100,000 grant which has donated to the IPC’s soon to be launched Agitos Foundation to fund youth development initiatives ahead of and during the 2013 Youth Parapan Games that will take place in Buenos Aires, Argentina.

• Striven for or enabled the development of sport and the opportunities it provides young people;

• Provided an inspirational example for youth through an exemplary sporting career both on and off the field of play; or

• Introduced sport in a way that improves the lives and lifestyles of a community.

On accepting the award, Sir Philip said: “I am deeply honoured and humbled to receive this prestigious award. One of my and the IPC’s greatest passions is to provide far more sporting opportunities for everyone with an impairment around the world right from the grassroots right through to the elite level and the Paralympic Games.

“The IPC and the Paralympic Movement as a whole have an exceptional track record for using sport to showcase on a global level what can be achieved by people with an impairment.

“Our Games which start here in London on 29 August will once again as a catalyst to change perceptions of people with an impairment and drive social inclusion.

“The Paralympic Games have enjoyed exponential growth since their inception in 1960. Here in London we will have a record number of athletes and countries taking part, and it is vitally important that we continue to bring young people into the Movement to continue this growth and momentum.

“On behalf of the whole Paralympic Movement I would like to say how grateful I am for the $100,000 grant which I will donate to the Agitos Foundation for use in funding youth development initiatives in the Americas.”

While still competing on the basketball court, he began administering the sport off it. Sir Philip was elected to three non-consecutive terms as chairman of the Great Britain Basketball Federation (1977-1980, 1984-1987, 1989-1994); became the first athlete to lead the sport worldwide, when he was elected chairman of the Wheelchair Basketball Section of the International Stoke Mandeville Games Federation in 1988; founded the International Wheelchair Basketball Federation in 1989; and served as its first president from 1989-2002.

During his career as a Wheelchair Basketball administrator, Sir Philip helped spearhead the evolution of the sport as well as its governing body – making the sport more dynamic and attractive to youth and dramatically increasing its growth and universality.

Since December 2001, Sir Philip has served as the second president of the IPC, where he not only has presided over the most successful editions of the Paralympic Games but also has helped drive the IPC’s focus on sport development.

In 2003, Sir Philip was elected a member of the International Olympic Committee. In this position he has worked to strengthen the cooperation between the IOC and IPC and has endeavored to raise the interests of Paralympic sport and its athletes the highest international levels.

The Humanitarian Award is one of several core programs GSD runs. It also conducts mentorship programs, through which dozens of deserving children travel to the Olympic and Youth Olympic Games to gain knowledge through cultural exchange and inspiration from athletes; furthers sport values-based education; and funds youth sport development programs in the U.S. and across the world through partnerships with sport governing bodies.