Six days of stunning competition concluded with 11 of the 24 competing countries winning at least one medal. 03 Aug 2014
Imagen 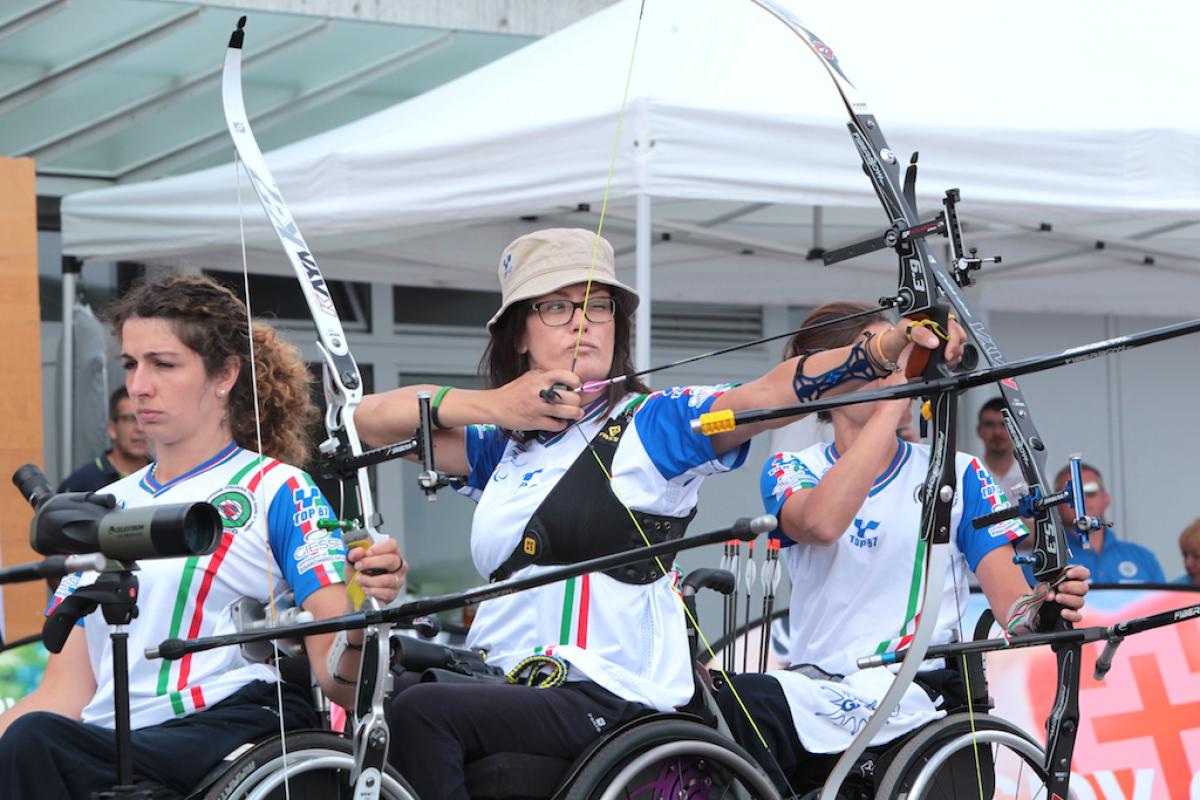 Italy's women on their way to 2014 European gold in the women’s recurve open team at Nottwil 2014.

In total there were 12 medals events in Nottwil and 11 of the 24 competing countries won at least one medal.

Italy’s first gold of the Championships came on Saturday (2 August) in the men’s compound open team.

The trio of Alberto Simonelli, Matteo Bonacina and Micro Falcier beat Turkey 220:209 to top spot, whilst Philippe Horner, in winning bronze as part of the French team, secured his first international medal since switching allegiances from Switzerland. The French beat Poland 224:217.

Sunday proved a fruitful day for Minjo as she took a second gold in the women’s recurve open team. Together with teammates Annalisa Rosada and Veronica Floreno, the trio beat Russia 5:4, whilst Turkey completed the podium with a 5:1 victory over Czech Republic.

The trio of Karina Granitza, Vanessa Bui and Lucia Kupczyk beat Russia in a thrilling gold medal match which saw the scores tied at 207 apiece. In a nail biting shoot-out the Germans held their nerve the best and came out on top 28:23. Turkey edged the bronze with a 211:210 win over Italy.

World champion Burcu Dag inspired Turkey to gold in the compound mixed team together with partner Dogan Hanci. The pair beat the Russia duo of Stepanida Artakhinova and Aleksander Zubar in an extremely tight contest. Tied at 147, the final went to a shoot-out which the Turkish pair marginally edged to secure gold. Great Britain’s Mel Clarke and John Stubbs took the bronze with a 146:142 win over Italy.

Bronze went to Czech Republic’s David Drahoninsky, the Beijing 2008 gold medallist who, during qualification, had set a new world record of 670. He beat Germany’s Uwe Herter 133:126.

The women’s equivalent was an all British affair.

After finishing 7th in the women’s compound bow open at London 2012, Sweden’s Zandra Reppe will be even more delighted after winning gold. The Swede beat Great Britain’s Mel Clarke in a tight and tense final 135:134, whilst Turkey’s world champion Burcu Dag took the bronze with a 133:129 victory over Italy’s Eleonora Sarti.

On Sunday, three of the five gold medals not won by Italians were won by Russia, Great Britain and Poland.

Bato Tsydendorzhiev won Russia’s only gold of the event with success in the men’s recurve bow open with a convincing 6:0 defeat of France’s Stephane Gilbert. Italy’s Alessando Erario picked up the bronze after beating Russia’s Anton Zaypaev 6:4.

Great Britain secured second spot on the final medals table with gold in the men’s recurve open team. The trio of David Phillips, Simon Powell and Paul Browne were too strong for Russia 6:2. Italy picked up their final medal of the weekend, a bronze, with a 6:0 win over Turkey.

Finally, Poland, courtesy of Milena Olszewska and Ireneusz Kapusta, took gold in the recurve mixed team. The pair beat Germany 5:3 to take gold, whilst Great Britain scraped by France to secure the bronze.

For all the results from the Nottwil 2014 European Para-Archery Championships please visit the official competition website.