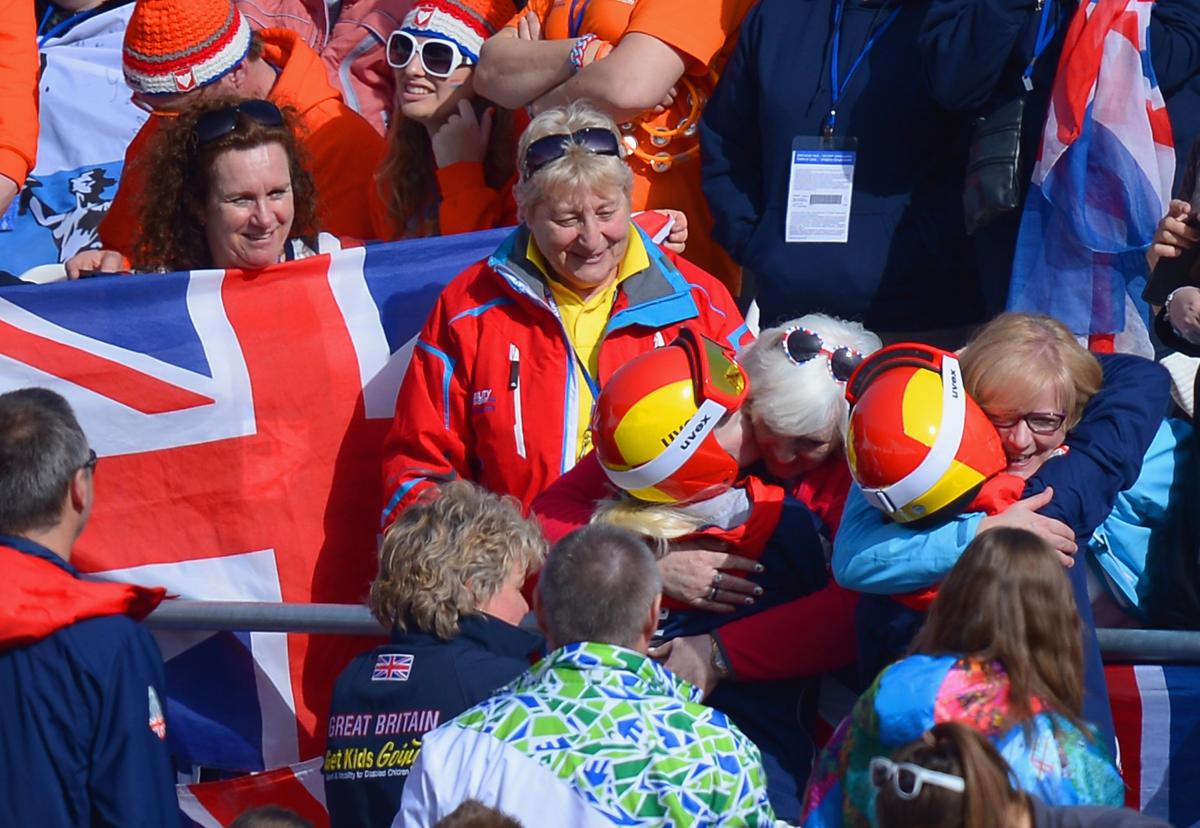 Kelly Gallagher celebrates with fans at the Rosa Khutor Alpine Centre after winning the first-ever Paralympic Winter gold for Great Britain in the women's super-G visually impaired on Day 3 of Sochi 2014.

Two-time Paralympian Gallagher and guide Charlotte Evans clocked a time of 1:28.72 in the super-G at the Rosa Khutor Alpine Centre.

"It's cool and hard to believe," Gallagher said. "I had such a bad day on downhill. Today, I just wanted to ski. We worked really hard, but it means a lot to us to have just skied."

"I hoped to get a better result,” Frantceva said. “It was not easy to manage the track today.”

The Brits and Frantceva managed to stave off Slovakia's Henrieta Farkasova, who was looking to defend her Paralympic gold medal in the super-G from the Vancouver 2010 Games. Farkasova finished fourth with a time of 1:37.54.

Etherington, who turned 23 on Sunday, won silver in the downhill on Saturday with her guide Caroline Powell. The medal was Great Britain’s first Paralympic medal on snow in 20 years. She was just happy to be back on the podium after nearly stumbling at the so-called lake jump.

"It's really crazy to win a medal,” she said. “We made a few mistakes, but we will be more confident tomorrow.”

"She is amazing at the big events,” Bochet said of Jambaque. “She's probably at the peak of her career … There was no plan (to finish gold and silver); it worked out better than what we had hoped for."

Bochet, who won Saturday’s downhill with a time of 1:30.72, has a legitimate shot at winning five medals in Sochi after she swept all five events she competed in at the 2013 IPC Alpine Skiing World Championships. She will go for gold again in Tuesday’s super-combined, Friday’s slalom and Sunday’s giant slalom.

In the women’s super-G sitting, Germany’s Anna Schaffelhuber won gold in 1:29,11, way out in front of favourite Claudia Loesch of Austria (1:31.20). The USA’s Laurie Stephens took home her second medal in Sochi with a bronze-medal performance of 1:32.09 in the super-G. Stephens, who won the super-G at the Torino 2006 Paralympics, finished third in the downhill in Sochi.

Schaffelhuber capitalised on the confidence she gained from winning Saturday’s downhill in 1:35.55 while Loesch – who won the super-G in Vancouver and is the reigning world champion in the - event was rattled going into the super-G after failing to finish the downhill on Saturday.