Lithuania confirm their position as the men's team to beat with another big win. 31 Aug 2012
Imagen 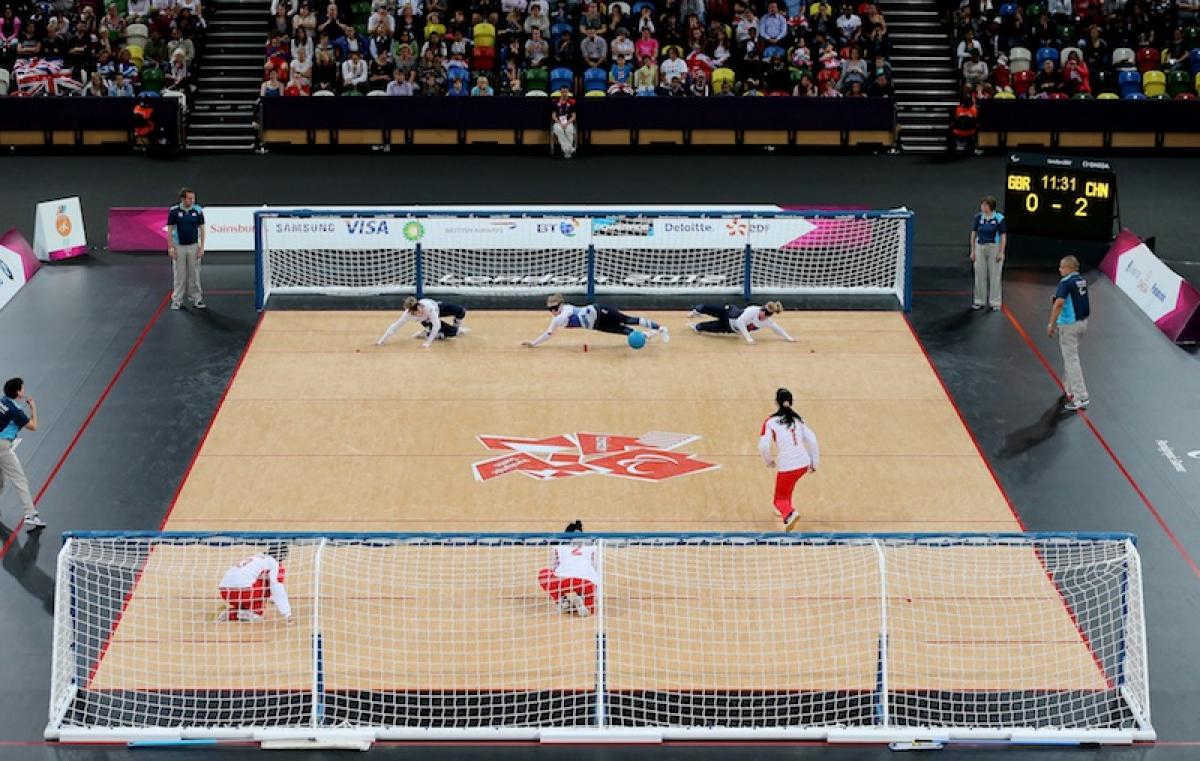 Lithuania cemented their position as the team to beat in the men’s competition with another resounding victory, beating Finland 10-0.

Great Britain failed to record their first goalball victory at the Paralympics when Finland saved a last-second penalty in a controversial group C match at the Copperbox on Friday.

With the scores level at 1-1, Finland were penalised for a high ball with their last throw of the match, but Katija Heikkinen managed to deny Jessica Luke to hold onto the draw.

Krista Lappanen put Finland ahead with a goal in the first half, before Luke equalised for GB with a penalty – their third of the match after the first two had been saved.

Finland were then awarded a controversial penalty with nine seconds remaining, after Great Britain coach Knut Kursawe called his fourth timeout of the game – the rules stating you are only allowed a maximum of three in regular time.

Goal-scorer Jessica Luke saved the penalty before seeing her own saved seconds later. After the game she said: “It was a nerve-wracking game. Finland gave us a tough game but we hope we gave one back.”

It was more disappointment for Great Britain’s men as they gave away six penalties in the 7-1 loss to Turkey in their second group A match.

Turkey, who beat Beijing 2008 bronze medallists Sweden in their opening game, could have won by a greater margin as they only scored from three of the penalties.

Speaking after the match Adam Knott could not hide his disappointment on the outcome: “We made some mistakes and we're disappointed with the result, but we're encouraged with what we've done. There were a lot of close shots today.”

Britain need a result on Saturday against Sweden to keep their hopes of qualification alive.

Sweden came out on top 5-4 in a close encounter against Brazil in their men’s group A match.

The Swedes led 3-1 at half-time thanks to Niklas Hultqvist’s hat-trick, but Brazil came back strong and edged ahead 4-3 with three minutes remaining on the clock.

Late goals from substitute Stefan Ghane and Hultqvis clinched victory for Sweden, who made amends for their poor start to the tournament against Turkey on Thursday.

Lithuania cemented their position as the team to beat in the men’s competition with another resounding victory, beating Finland 10-0.

It was the second match in as many days that the world champions have finished before full-time. Genrik Pavliukianec scored five goals in the first half as Lithuania raced to an eight goal lead at the interval. Two more quick goals within a minute of the restart followed to end the match.

Although Finland beat Lithuania to take the European championship title last year, they were no match for the world champions on this occasion.

In the opening game of the day Akiko Adachi scored a second half brace for Japan to secure a 3-1 victory over Australia in their opening women’s group D match.

Australia paid the price for missing a first half penalty when Masae Komiya scored with a bouncing shot to give Japan the lead at the break.

Nicole Esdaile equalised for the Australians before Adachi hit back with two goals to seal victory for Japan.

Elsewhere in the women’s group C, China thrashed Brazil 8-0 to make it two wins out of two. Shasha Wang scored five goals for the Beijing 2008 silver medallists in what was a comfortable victory.

China recorded their first win in group B of the men’s competition on Friday evening. Having lost to Iran in their opening fixture, the defending Paralympic champions responded with a resounding 11-4 victory over Korea.

Iran continued their impressive start to the men’s tournament by beating Canada 9-2. Seyed Mehdi Sayahi followed up his nine goal haul from the win over China with a hat-trick against the Canadians before being substituted in the second half.

Hassan Jafari was delighted with the start Iran have made to the tournament. He said: “I am 100 per cent happy. It was a difficult and challenging game. We are all happy (with the result)."