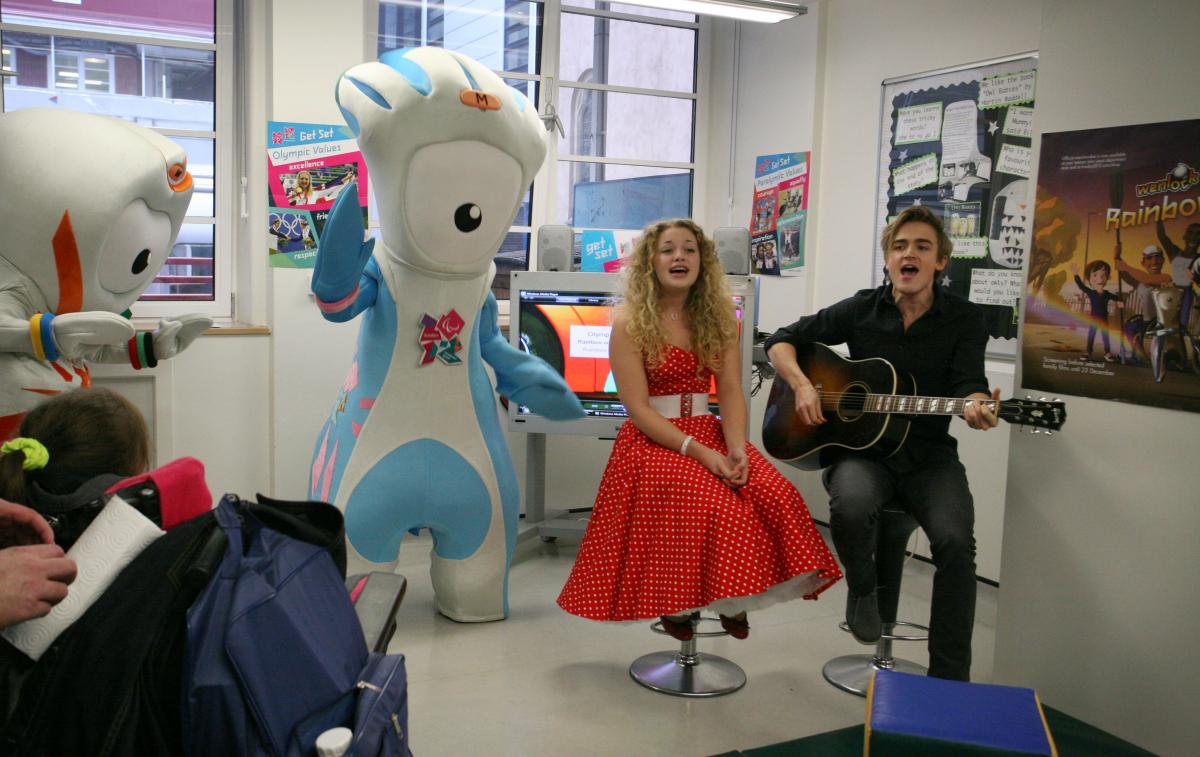 Mandeville with Tom and Carrie Fletcher, who will perform the "On a Rainbow" song at various live events through the London 2012 Education Programme.

The London 2012 Paralympic Games mascot Mandeville is set to burst onto the music scene along with Olympic Games mascot Wenlock. The two are featured in the mascot song, “On a Rainbow,” which was written and recorded by McFly star Tom Fletcher and is available to download now.

Wenlock and Mandeville have proven popular in schools and online, and the duo has also appeared in the children’s comic, “The Beano.” They have starred in their own animated films, and the third installment of the adventure is also being premiered Thursday (17 November) and features the new song.

“On a Rainbow” is written by Tom Fletcher, lead singer and guitarist from pop rock band McFly and features Tom’s sister, Carrie Fletcher, as well as pupils from West Leigh Junior School Choir in Southend-on-Sea. The song is based on Wenlock and Mandeville’s journey to the London 2012 Games and the young people they meet along the way.

Tom’s inspiration for the song came from the animated mascot films created since their launch in May 2010. The short films show how Wenlock and Mandeville are created from the last two drops of steel from the Olympic Stadium, and then also follow their journey as they continue on their sporting adventure across the UK, inspiring young people to take up sport.

Tom and Carrie will perform the song live at events at Great Ormond Street Hospital School, a member of the Get Set Network and at Westfield Stratford City. Children in Get Set Network schools across the UK will be learning a dance to accompany the song through the London 2012 Education Programme, and will perform the dance at London 2012 World Sport Day on 25 June, 2012.

The third mascot film called “Wenlock and Mandeville’s Rainbow Rescue” will also be previewed at the events and will be shown on 373 screens in more than 100 cinemas nationwide before selected family movies from 25 November to 23 December.