London 2012 medals to go to the Tower of London

The medals for the London 2012 Paralympic Games will be kept safe in the historic Tower of London during the Games. 03 Jul 2012
Imagen 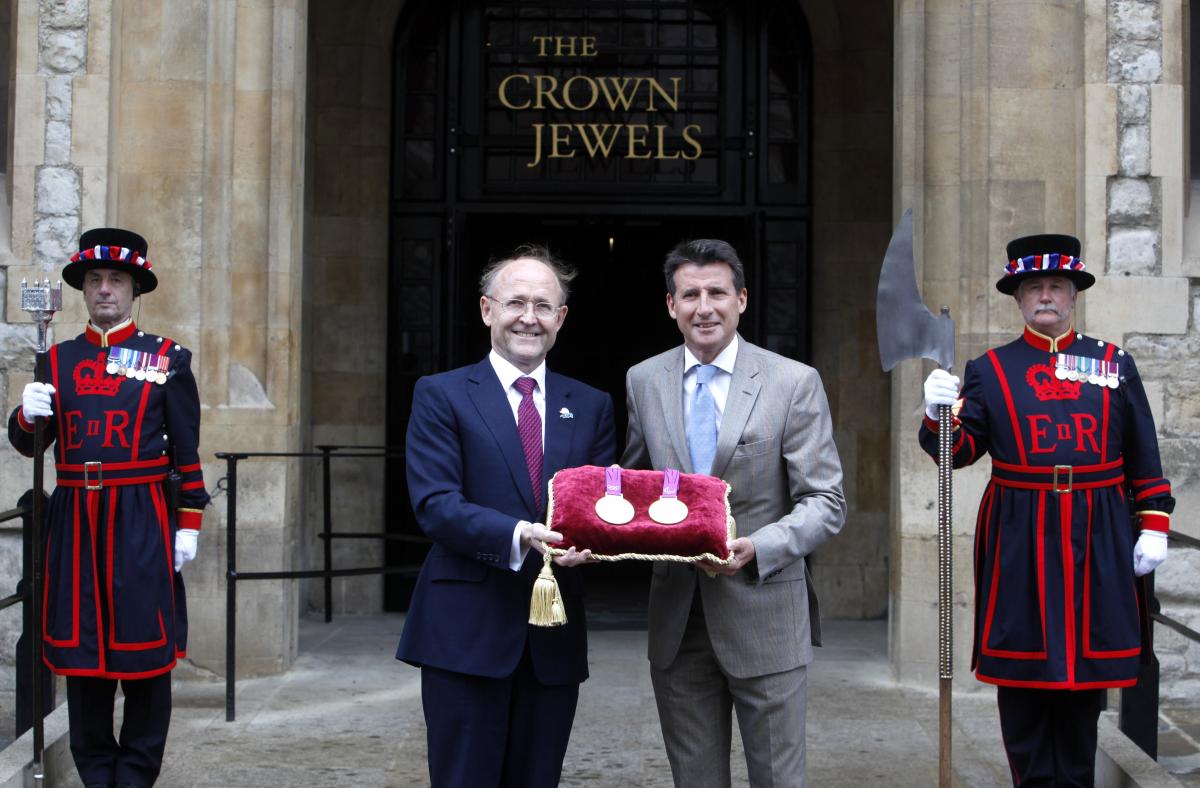 Seb Coe and Jan De Plessis, Chairman of Rio Tinto, delivering the medals to The Tower of London which will keep them safe during the Games

“So there can be no better sanctuary for the 2012 medals - the most precious possession any athlete could hope to possess - than at this world famous iconic landmark.”

Rio Tinto, the mining company responsible for the production of the precious metals for the London 2012 Games, will hand over the final Olympic and Paralympic medals to LOCOG for secure storage in the vaults at the Tower of London during the Games.

The gold, silver and bronze medals which will be awarded to the athletes at Games-time, will be securely locked away in the famous vaults at the Tower of London and will remain there until they are needed for the Victory Ceremonies. In total, 4,700 medals have been produced and will be awarded in 805 Victory Ceremonies that will take place in over 30 London 2012 venues across the UK.

A ceremonial event took place on Monday (2 July) at the Tower at which the final medals arrived and were taken down to the vaults by Rio Tinto Chairman, Jan du Plessis, and LOCOG Chair, Seb Coe.

“For an athlete, winning an Olympic or Paralympic medal represents the conclusion of thousands of hours of training and reaching the highest level in sport,” said LOCOG Chair, Seb Coe. “The Victory Ceremonies then provide the moment they can truly celebrate their success. It’s great that the London 2012 medals will be kept safe and secure at the Tower of London until then.”

The arrival of the medals was announced by a fanfare by the trumpeters of Her Majesty’s Royal Marines Collingwood and attended by The Tower’s famous Yeoman Warders and 150 Get Set network school children from the London Borough of Tower Hamlets.

“For centuries the Tower of London has protected some of this country's greatest treasures,” said the Mayor of London, Boris Johnson. “So there can be no better sanctuary for the 2012 medals - the most precious possession any athlete could hope to possess - than at this world famous iconic landmark.”

Rio Tinto has provided eight tonnes of gold, silver and copper from its Kennecott Utah Copper mine in Salt Lake City, USA, and the Oyu Tolgoi mine in Mongolia to make the medals. These were produced by the Royal Mint in South Wales.

“Metals from our mines in the mountains of Utah and the deserts of Mongolia have now been transformed into these beautiful gleaming medals,” said Rio Tinto Chairman, Jan du Plessis. “All 65,000 Rio Tinto employees around the world are immensely proud to be playing a small part in the excitement of London 2012.”

The designer of the Paralympic Games medals Lin Cheung, a practising Jewellery artist and senior lecturer in Jewellery Design at Central Saint Martin’s College of Arts and Design, London also attended the event.

The first Paralympic medals to be awarded will be on the 30 August for the shooting event.

Rio Tinto has handed over the final Olympic and Paralympic medals to LOCOG for secure storage in the vaults at the Tower of London during the Games.