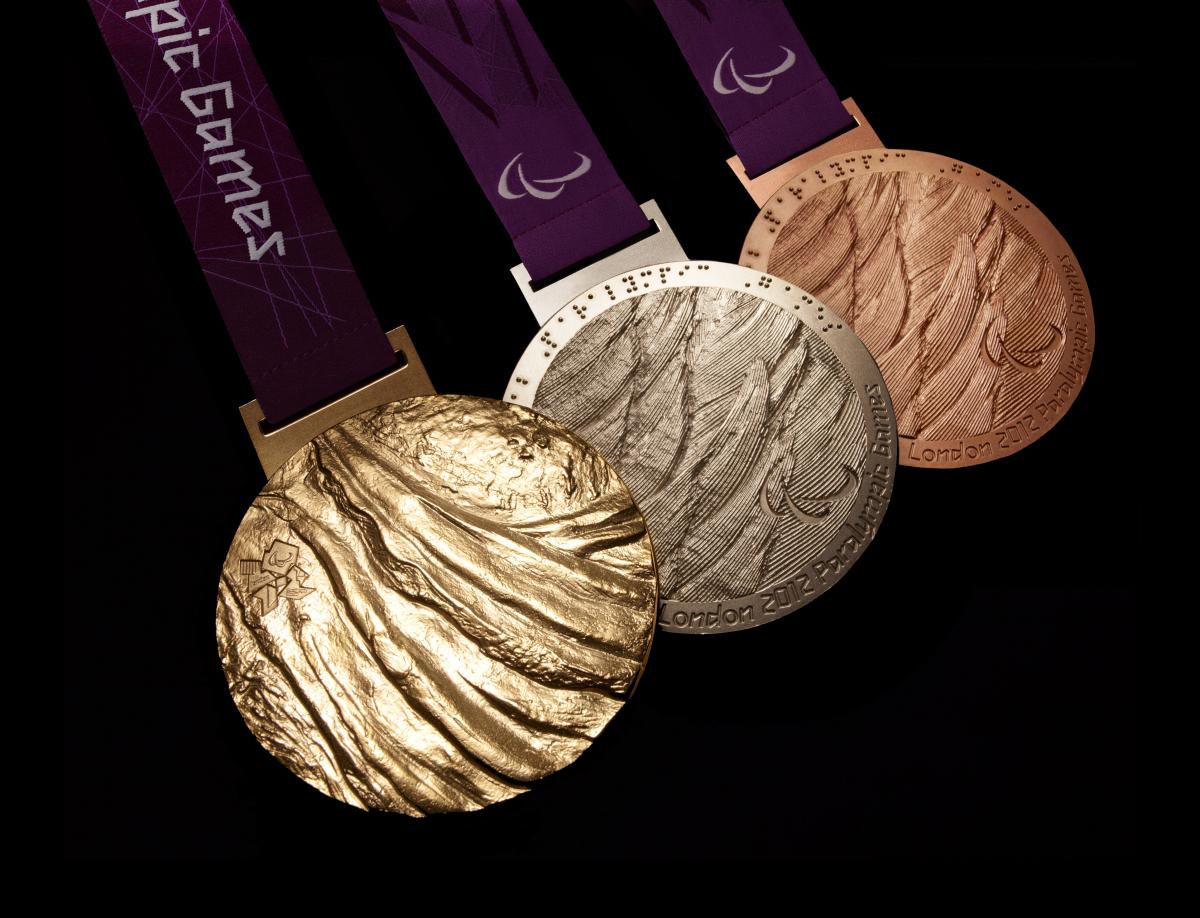 "If you want to see these medals being hung around the neck of British athletes next summer, I would encourage you to apply for tickets to the Paralympic Games."

With one week to go until the application window for tickets for the Paralympic Games closes, the London 2012 Paralympic Games medals have been unveiled at the opening of a new display at the British Museum for the Cultural Olympiad which gives the public their first opportunity to see the medals.

The medals, which are presented in recognition of the incredible achievement of outstanding Paralympic athletes, will be made in Britain and have been designed by Lin Cheung, a practising Jewellery artist and senior lecturer in Jewellery Design at Central Saint Martins College of Arts and Design, London. In 2012 more than 2,100 Paralympic medals will be presented in 502 Paralympic victory ceremonies in more than 19 venues over 11 days of competition.

Inspired by the endurance, focus and achievement of elite Paralympic athletes, Lin Cheung has created a medal that not only represents the core values, beliefs and spirit of the Games, but that is also a desirable object, tactile and rich in elements of illustration, typography and texture.

The obverse side of the medal represents ‘Spirit in motion’. The image struck into the obverse surface of the Paralympic medal is an imagined close-up section of an outstretched wing of the Greek Goddess of Victory, which has been depicted on the front of the Olympic medal since 2004. This image represents forward flight, power and lightness - a natural metaphor for the spirit of the Paralympic Games.

The reverse of the medal represents ‘The heart of victory’. A depiction of the area close to the heart of the Greek Goddess of Victory is symbolically chosen to reflect inclusion and togetherness at an historical event. To further the concept of modernity and 5th century BC authenticity, the reverse is overlaid with textural qualities moulded directly from the Plaster Cast of ‘The Nike of Paionios’ residing in the British Museum Cast Collection. The original statue: The Nike of Paionios, sculpted in marble by Paionios from Mende between 425-421 BC can be seen in The Museum of Olympia, Ilia, Greece.

Seb Coe, LOCOG Chair, said: ‘I’m sure that the design of the medals will be a source of inspiration for the thousands of Paralympic athletes around the world who are counting down the days before they compete in what will be an amazing festival of elite sport. British Paralympic athletes have had great medal success at previous Games – winning 102 medals at the Beijing 2008 Games alone. If you want to see these medals being hung around the neck of British athletes next summer, I would encourage you to apply for tickets to the Paralympic Games.’

Sir Philip Craven, IPC President, said: ‘For those lucky enough to win one of these stunning medals it will remain a treasured possession for the rest of their lives. It will make all the years of training and dedication to be both physically and mentally ready for London 2012 more than just worthwhile.’

Lin Cheung said: ‘It is very exciting to think that elite Paralympic athletes will be celebrating their achievements next year at London 2012 Paralympic Games by wearing my medal design. The design for the front and back clearly talk to each other through the sculptural qualities of the victory goddess’s tunic on one side and her imagined wings on the other and this was very important to me but, ultimately, I hope the medal will be enjoyed and cherished as a symbol of great personal achievement.’

Baroness Tanni Grey-Thompson DBE, winner of 16 Paralympic Games medals, said: 'Winning a Paralympic medal is the pinnacle of an athlete’s career and the reward for years of dedication. With less than a year to go I'm sure that seeing these beautiful medals will make Paralympic hopefuls around the world train that little bit harder to ensure they're in the best possible shape to win one.'

Jeremy Hunt Secretary of State for Culture, Olympics, Media and Sport said: ‘The excitement of hosting the Paralympics Games next summer is building. With Paralympic tickets already on sale, details of the torch relay announced last week and the official unveiling of the medals today, we are in a good place ahead of next year.

‘The British Museum and Rio Tinto have done a great job in displaying the story of the medals creation. I’m sure it will inspire our Paralympians to do everything possible to get their hands on one next summer.’

The Mayor of London, Boris Johnson, said: ‘With the goddess of victory emblazoned upon them the Paralympic medals, like their Olympic cousins, are beautifully crafted symbols of strength, speed and victory. It is only right that the achievements of elite athletes should be recognised by medals of such artistry, craftsmanship and design. The grand surroundings of the British Museum will offer a great opportunity to see them up close and to learn the captivating story behind them.’

Philip Attwood, the British Museum’s Keeper of Coins and Medals, said: ‘This display gives the public the opportunity to view the medals and tells the fascinating story of the journey that is taken from the mining of the ore through to the production of the finished medal.

‘The Olympic medal and Paralympic medal hold their own unique stories but seeing them displayed together reveals the way in which the two medals relate to one another. The front of the Olympic medal shows the Greek goddess Nike emerging from Athens' Panathenaic Stadium and heading, as it were, for London, the city that features on the other side. The design of the Paralympic medal includes a detail of the wings that carry her, while the back of the medal is modelled on the tunic of the goddess, now set on London 2012.’ ?

Tom Albanese, Chief Executive, Rio Tinto said: ‘We’re proud to sponsor the British Museum’s exhibition which provides an excellent illustration of the journey of these symbols of sporting excellent from Mine to Medals. Our 77,000 employees globally are excited that the stunning medals unveiled today started their journey at Rio Tinto’s Kennecott Utah Copper mine in the US, and from Oyu Tolgoi in Mongolia.’

Artists were invited to tender by the London Organising Committee of the Olympic and Paralympic Games (LOCOG), having been chosen by arts bodies from across the UK and a panel made up of experienced creative leaders in their field and sports representatives.

When creating the artists brief LOCOG’s Victory Ceremonies team worked closely with the British Museum’s Keeper of Coins and Medals, Philip Attwood, to look at the symbolic history of medals in Europe in the last century and in particular medals that held stories that travelled symbolically from the front of the medal to the back. It was in Europe that the first medals were made in the fifteenth century and text and images were carefully integrated on both sides.

From this first stage, six artists were selected for the second stage of design and development and asked to develop their designs to create a narrative that went from front to back. From this the panel felt that Lin Cheung’s design for the London 2012 Paralympic medals held a narrative that befitted the athletes achievements.

The LOCOG Athletes’ Committee, chaired by Jonathan Edwards, were heavily involved in the research development of the medal brief and consulted throughout the selection process.

Sir John Sorrell said: ‘The design is dynamic and very tactile, yet it does possess a gracefulness about it. This medal has a sculptural quality to it and whilst the Olympic and Paralympic medals are very different in style the panel felt that they sat very well together and importantly show the depth of quality in UK design.’

The ore for the medals is supplied by London 2012 sponsor Rio Tinto and is mined at Rio Tinto’s Kennecott Utah Copper Mine near Salt Lake City in America, as well as from the Oyu Tolgoi project in Mongolia.

The medals will go into production later this year at Royal Mint’s headquarters in Llantrisant, South Wales. 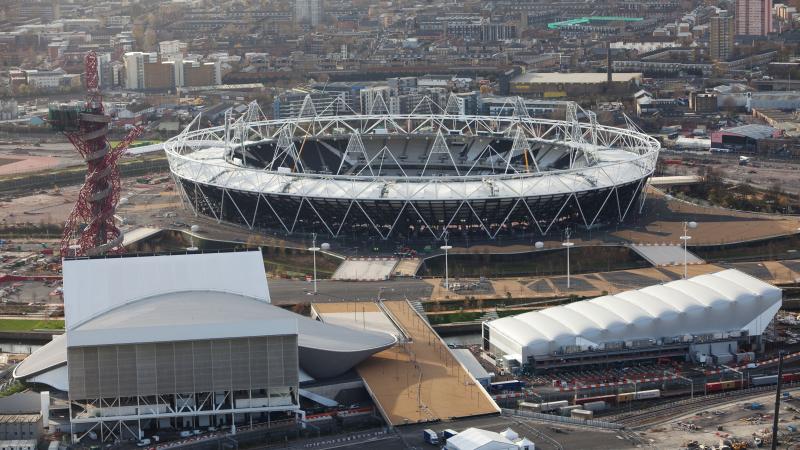