Boccia is one of 20 sports that form part of the London 2012 Paralympic Games programme. A total of 104 athletes will compete in seven different medal events between 2-8 September.

Some of the world’s leading Boccia players have given their seal of approval to preparations for the London 2012 Paralympic Games after a successful three day test event concluded on Monday (7 May).

As part of the third cluster of test events under the London Prepares banner, 40 leading Boccia players from 10 countries took part in a test event at the Basketball Arena and all were impressed with how things had gone.

Great Britain’s two-time Paralympic champion Nigel Murray said: “This event has given us a good flavour of what we can expect later this year when competing against the top nations.

“It’s great to be in London, and made us realize now just how close the Paralympic Games are.

“At the moment I’m relatively clam about the Games and just focusing on one competition and training session at a time, but the excitement levels are building all the time.”

World number three in the BC3 class, Greg Polychronidis of Greece, commented: “For the athletes, everything was ok with the test event. We didn't have any problems. The floor is one of the best I've played on. I'll just wait and hope that the London Paralympics has the best ever floor. That's what we expect."

Canada’s Paul Gauthier said: “"Being part of the London Prepares event has been fantastic. I'm looking forward to London putting on a great show, and I know they will."

The event was also deemed a success by Sandra King, London 2012’s Boccia Manager who has been involved in the sport since 1997 in various roles including national team manager and coach.

“I’ve been very pleased with how the test event has gone,” she said. “The standard of play has been fantastic and obviously with all test events, there are things we’ve learnt and things we’d like to do better.

King’s job in delivering a successful test event was made even more challenging by the fact that it took place in the Basketball Arena, and not Excel, the venue which will actually stage Boccia during the London 2012 Paralympic Games.

However, by trying to replicate the environment and conditions players can expect at Games time at Excel and integrating staff from both venues into the test event, King believes good lessons have been learnt. She was also impressed by the positive reaction of a number of people who have never seen Boccia before, including several Games Makers.

Sandra King said: “Our Games Makers have done their role training, seen the sport on TV and we’ve talked about it so they knew roughly what to expect. Part of what they have been doing during the test event is rotating their positions, some of which were on the field of play so they could see the action.

“The reaction of those Games Makers coming out, having seen Boccia for the first time, is ‘wow it’s a brilliant game, it’s a fantastic, I didn’t know it existed. I definitely want to see more.’

“And that’s the message I want to get to the public. Boccia is a highly tactical, very accurate target sport. I challenge the public to come in and imagine what you would be do with the ball if you were playing the next shot as very often you’d be surprised as the players come out with something very different and it takes your breath away.”

Boccia is one of 20 sports that form part of the London 2012 Paralympic Games programme. A total of 104 athletes will compete in seven different medal events between 2-8 September. 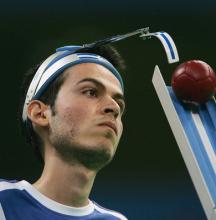