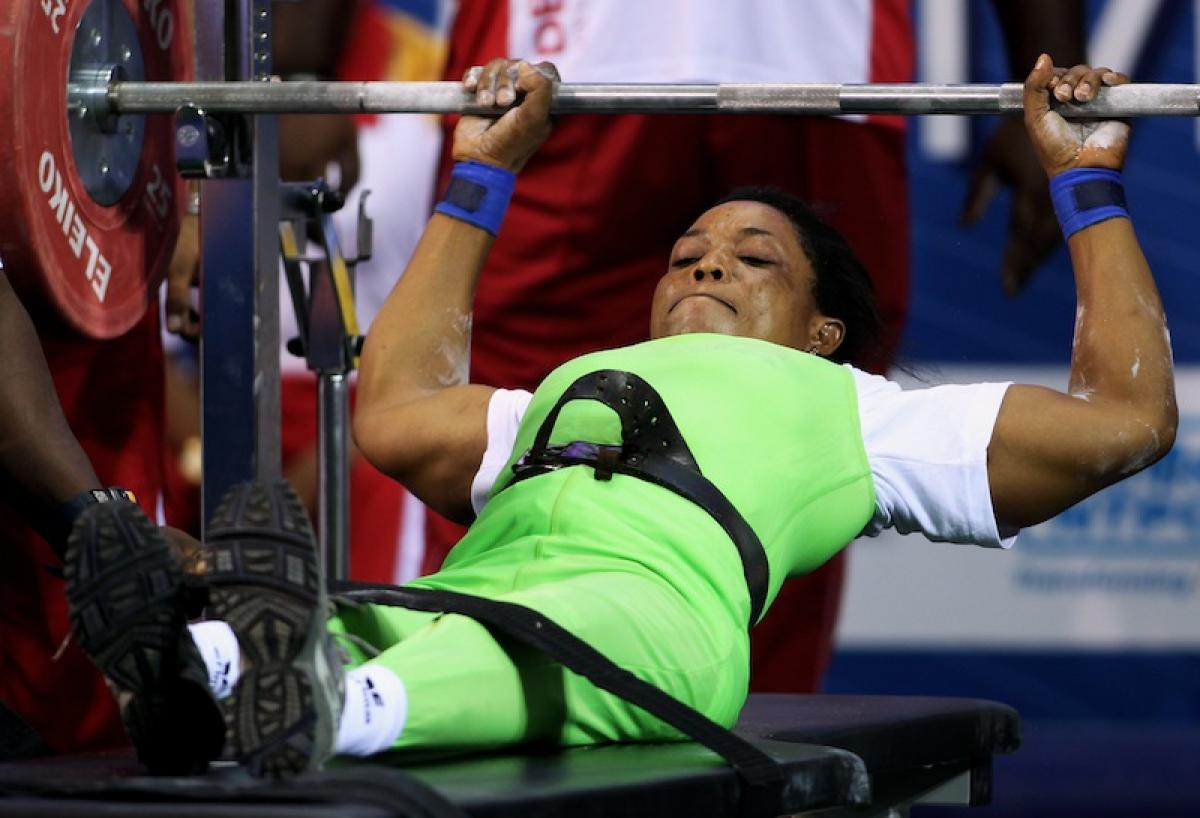 “We are doing well because we have determination, discipline and focus."

Nigeria continued to dominate the powerlifting medals as exuberant crowds were treated to new world and Paralympic records on day three at the ExCeL.

In the women’s 48kg Esther Oyema was untouchable on her way to winning Nigeria’s third powerlifting gold medal at the Games, setting new world and Paralympic records in the process.

The Nigerian equaled her compatriot Lucy Ejike’s records of 130kg in her first lift, before beating them in her second with a lift of 132kg. On her third she lifted 135kg, the new world and Paralympic record. She opted to take a fourth, but was unable to lift 140kg.

“I'm not surprised, because I worked very hard for it. I feel very, very good. I decided to be a world record holder and to be a champion. I never doubted it,” said Oyema.

Olesya Lafina won the silver medal; the Russian was successful in all three lifts, finishing with a best of 120kg.

China’s Shi Shanshan secured the bronze medal with a best lift of 114kg, equaled by Turkey’s Yasemin Ceylan, though the Chinese powerlifter finished third courtesy of a weight advantage.

She effectively won gold with her first lift of 125kg.

The Nigerian tried to sum up just why their athletes are dominating so much in the powerlifting at the Games.

“We are doing well because we have determination, discipline and focus,” she said. “We take it very seriously. It is our job.”

Tamara Podpalnaya took silver in an impressive display, the fourth powerlifting medal of her Paralympic career. The Russian finished with a best lift of 119kg.

The bronze medal was won by Xiao Cuijuan. The Chinese powerlifter finished narrowly behind Podpalnaya with a best lift of 118kg in what was a tense final round.

There was disappointment for Great Britain’s Natalie Blake who, despite receiving great support from the home crowds, failed to lift 88kg in her first two attempts before retiring from the competition.

The pre-event favourite had targeted the gold medal in what was his first Paralympic Games and secured it comfortably.

On his first lift, he easily raised the bar at 192kg whilst on his second attempt he managed to lift 196kg. Having already secured the gold medal going into the final round, he attempted to lift 203kg which would have been a new Paralympic record, but failed to do so.

Jason Irving, who competed in Group B, finished with a best of 163kg and was Great Britain’s final powerlifter to compete at the London 2012 Paralympic Games.

Having failed to lift 170kg in two attempts, Irving said: “I am disappointed. It was a great crowd, there was a lot of support. It was fine margins really, I wasn't a million miles away with either of the two lifts.”