The International Paralympic Committee (IPC) has announced the athletes, teams and officials who have made the shortlists for November’s 2013 Paralympic Sport Awards which will take place in Athens, Greece and are proudly partnered by the IPC’s International Partner Allianz.

Between them the athletes won 38 gold medals at London 2012 and due to a record number of nominations this year from members, the IPC has decided to split the best Games debut award into two categories for males and females.

The shortlists for each of the six categories are as follows:

• Won 100m gold in a world record and broke the Paralympic record to secure 200m gold.

• First Iranian woman to win either Olympic or Paralympic gold after success in the women's individual recurve W1/W2.

• Finished one of Paralympic sport’s most successful ever careers with a fourth wheelchair tennis singles title and gold in the doubles.

• Claimed two individual gold medals and one team bronze in wheelchair fencing and was also re-elected to the IPC Athletes’ Council.

• Competed on eight days and was unbeatable winning four golds in as many events in what is widely regarded as one of Paralympic sport’s most competitive classes.

• Became the first Namibian to win gold in either the Olympic or Paralympic Games after success in the 200m T37. Also won 100m T37 silver.

• Followed up winning 100m and 200m European titles in June, by claiming 100m silver and 200m gold at the Paralympics. She also set new world records for both sprints in London.

• Unbeatable winning gold in all four track events he took part in, breaking the Paralympic record in the 100m and 200m.

• Broke the 100m world record in June and in August silenced 80,000 people chanting his name before taking Paralympic gold in the same event.

• Took gold with victory over Canada having won silver in 2008.

• Won their third successive gold in this event without even conceding a goal.

• Claimed their third gold in the last four Paralympics by beating Australia in the final.

• Brazilian Chef of Mission responsible for 182 athletes in 18 different sports who finished seventh place in the medals table – the best ever performance by a Brazilian team.

• Head Table Official for wheelchair rugby who, in the lead-up to the Games developed and delivered a comprehensive training project that enabled a pool of qualified National Technical Officials from the host country to be selected for the Games.

• Through the UCI and LOCOG, Louis was responsible for the London 2012 cycling course, which proved to be a challenging and fantastic event. 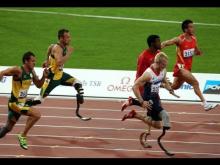