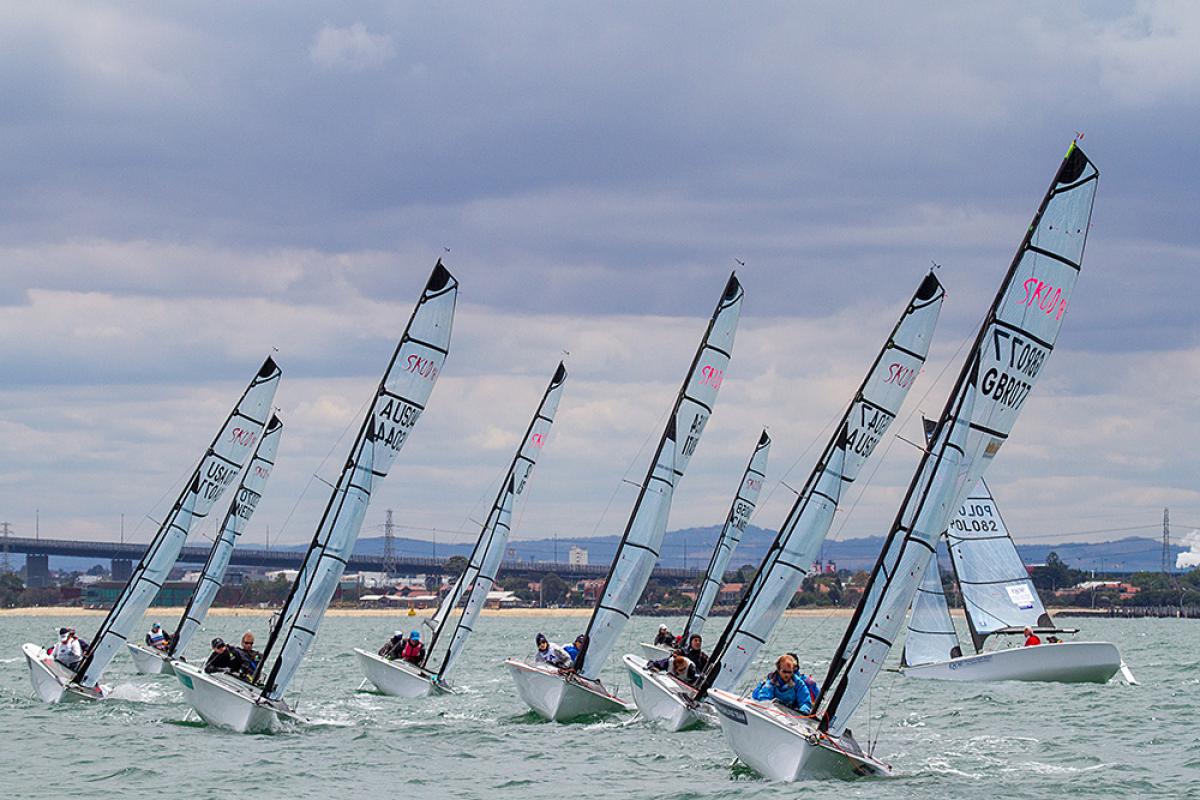 Competitors at the 2015 Para World Sailing Championships out of Williamstown's Royal Yacht Club of Victoria.

ⒸTeri Dodds
By By ISAF

Melbourne's run of perfect sailing conditions continued on the bay on Saturday (28 November) for races three and four of the Para World Sailing Championships out of Williamstown's Royal Yacht Club of Victoria.

The breeze was generally southerly, starting at around eight knots and steadily building to approximately 12 knots towards the end of the second race.

Australia’s Dan Fitzgibbon and Liesl Tesch in the SKUD18 and compatriots Colin Harrison, Jonathan Harris and Russell Boaden in the Sonar retained their lead whilst Germany's Heiko Kroeger made a move to top spot in the 2.4mR.

In the two-person keelboat, the SKUD18, racing began with a general recall. Two SKUD18s were recalled in the pre-start, but the remainder of the fleet got away well. Great Britain's Alexandra Rickham and Niki Birrell crossed the Australian boat sailed by Dan Fitzgibbon and Liesl Tesch on the approach to the first mark and quietly consolidated their lead as the race progressed to record a comfortable win ahead of the Australians.

The Italian boat sailed by Marco Gualandris and Marta Zanetti were very close to the Australians to finish third, followed by the Dutch pair, Rolf Schrama and Sandra Nap.

In the second race of the day, Fitgibbon and Tesch began well to take another win and put themselves clearly ahead after four races. The American boat sailed by Ryan Porteous and Maureen McKinnon finished second, but the British team, which had done so well in the first race, finished, by their standards, a disastrous 13th place.

After four races, it is the Australian boat of Fitzgibbon and Tesch who lead on just six points, followed by Rickham and Birrell on 19 points with Italy's Gualandris and Zanetti next on 20 and the Polish pair of Monika Gibes and Piotr Cichocki on 21. A real scrap will now develop for the remaining podium positions if the Australians continue their present form.

Their form to date confirms his thoughts.

The 2.4mR course was again the centre of the action. With forty eight evenly matched boats fighting for position at every mark rounding, there is action a-plenty and judges have been kept busy with protests at the conclusion of racing.

A feature of the second race today was the performance of the German champion, Heiko Kroeger, who seemed hopelessly buried in a mass of boats on the final rounding of the windward mark but in a masterful display of downwind sailing, skirted around the bunch on the northern side to record a very creditable fourth place to retain his place at the head of the leader board with 10 points, three ahead of Frenchman Damien Seguin, who finished today's program with fifth and first placings.

Australia's Matt Bugg had a field day today, scoring a third place in the first race and going one better for an easy second in the second. He now lies third on the leader board.

In the Sonar class, competition is hotting up as the fleet starts to challenge the dominance of the Australian crew of Colin Harrison, Jonathan Harris and Russell Boaden. They came away with two second places today and remain on track in their campaign, but a measure of the determination of the fleet was their general recall in today's second race.

Fleet standings have the Australians ahead at six points, followed by the Norwegians Aleksander Wang-Hansen, Marie Solberg and Per Kristiansen on 16 points and Britain's John Robertson, Hannah Stodel and Steve Thomas on 19. With the French team on 19 and New Zealand on 20, this contest is livening up.

Racing is once again scheduled to commence at 13:00 local on 30 November.