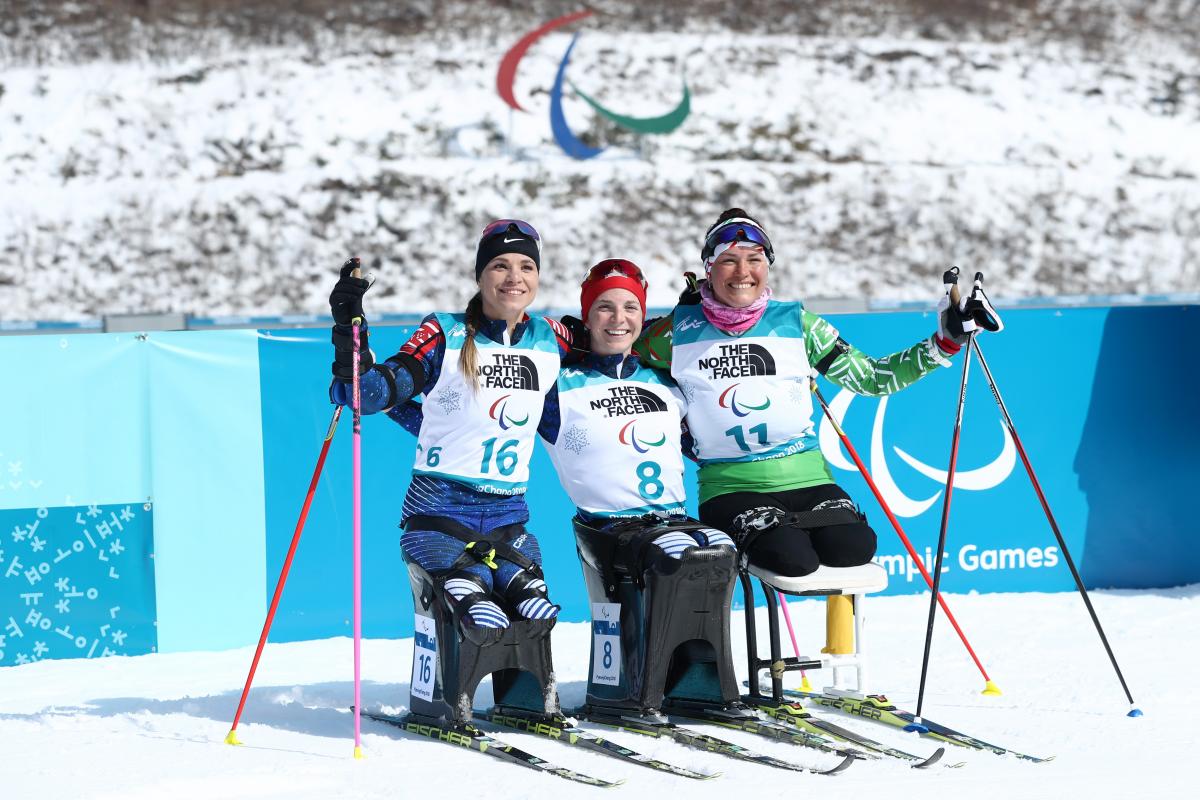 "The emotions are just unbelievable. It turned out t5o be a very good race. I didn't manage to make the last shot, but I'm very satisfied with the race."

"We worked all these four years to get to this result. The labour was not in vain. I must say in all honesty, it is not easy to compete at the Paralympics. It's very hard. There is a lot of pressure.

"I could not fall asleep until 1am, [because] I was worrying.

"We grabbed third place literally in the last 300 metres."

"In truth, I was uncomfortably nervous ahead of this race because I was scared that I lost all my form. I was not able to prepare like I would have wanted to, but in reality it was just fears, and everything turned out great."

"I am here after an illness. This is my third time stepping on the skis [in PyeongChang], so it is a very unexpected result.

"I was lying down (in the previous days), I had a high temperature, a cough and runny nose. Even now I'm speaking with difficulty. I can't breathe through my nose.

"I came out to this race, in a way, just to pump myself up, and instead I got a silver. It's a big achievement for me at this moment."

"It's a surprise. It's just unpredictable and I didn't expect it at all. I tried really hard to battle against my nerves. There was this storm of emotions inside me. There are so many spectators. It's very hard for the first time, so I am very happy with my result."

"It was a wonderful race. I'm so, so happy about what happened today. It was perfect.

"It's just a dream come true for a competitor. I gave my all this year to get it and it’s just wonderful.

"I won because of really good skis and a good mind."

"It's great to prove that again I'm right up there with the best. The sprint, I have some of my best results in it, but it's also the one that I'm always the one on the fence about because it comes a little more down to speed. I don't always have that speed against some of the best guys so I just make sure I shoot clean and put my skis into it, my body into it and see what happens.

"That's exactly what I wanted to do, set the tone for the rest of the Games for me. I know now the shape is there. Hopefully I can use this to springboard the rest of the results further down the road."

"I was showing really good results, but in Sochi I didn't get in form in time and nothing went as planned. But here, I corrected my mistakes and it's a great joy now."

"I don't feel that I won. It is so unexpected. I have no words.

"It was like an ordinary race, like a stage of the World Cup. There was no stress at all. I was stressed yesterday but today I just came out without any stress at all.

"I can't even believe that this is the Paralympics. For me, it is the first."

"The saddest places are the second and fourth. Of course, at the Paralympics you can't weep over getting a podium, but it is sad that it's not first place. But everything is still ahead. There are still races to go and there are still things to accomplish.

"I need to keep gaining speed and then in the final races I will get better results."

"I really wanted it. But to be honest I had no expectations from today's race. I didn't even think that I would be third because recently my shooting is very unstable. But I was able to overcome it and of course I am thrilled. It's a bronze medal."

"In the race, I just wanted to see what I can do, not worrying about anything else. In the last Games that I did in Sochi, I let the TV screens and the announcer get to me and today I just focused on what I can do and nothing else matters. I crossed the line and I wasn't even gong to look at the board and I was pleasantly surprised at the end."

"It's an excellent start. It's something I could only dream of."

On his wife Lidziya HRAFEYEVA (BLR) taking bronze in the women's 6km sitting biathlon earlier in the day:

"I was very nervous. I was watching each of her shots.

"To be honest, Lidziya is my product. I looked at how she raced and I understood that I must also be somewhere among the medallists because we prepare according to one plan, and that is my plan."

"It just felt super great. This season's just been a lead-up, just been feeling faster and more snappier and better on the range, lots of work with my biathlon coach and I think it's just coming together today."

"I've been having a good training in the past winter or so, so I thought it might be possible if I put together a really good race today and the conditions were great, we've got awesome skis, but still, pretty unexpected.

"I'm just really excited to be here. It's my first Paralympics, first race, so it's just a great way to kick off the week and hopefully (there's) more to come. It was an awesome race.

"We've put in a lot of work this season for biathlon specifically, so I'm just really proud that we're able to have a great race today."

"I am so happy, I feel like I just won my gold medal, basically. I'm so happy to be on the podium."

"I was told I was not going to be able to race. I was basically fighting for a chance at the start line. I dug as deep as I could for my team and I'm happy to be standing on the podium next to Kendall." well today and everything was well. I try not to celebrate in advance."

"It was unexpected, that's for sure. There were a lot of really strong athletes starting today and, to be honest, I didn't even hope to end up among the medallists even though I felt well today and everything was well. I try not to celebrate in advance."