The Honourable Carla Qualtrough, Minister of Sport and Persons with a Disability, headlined a group of five individuals inducted into the Canadian Paralympic Hall of Fame. 10 Apr 2017
Imagen 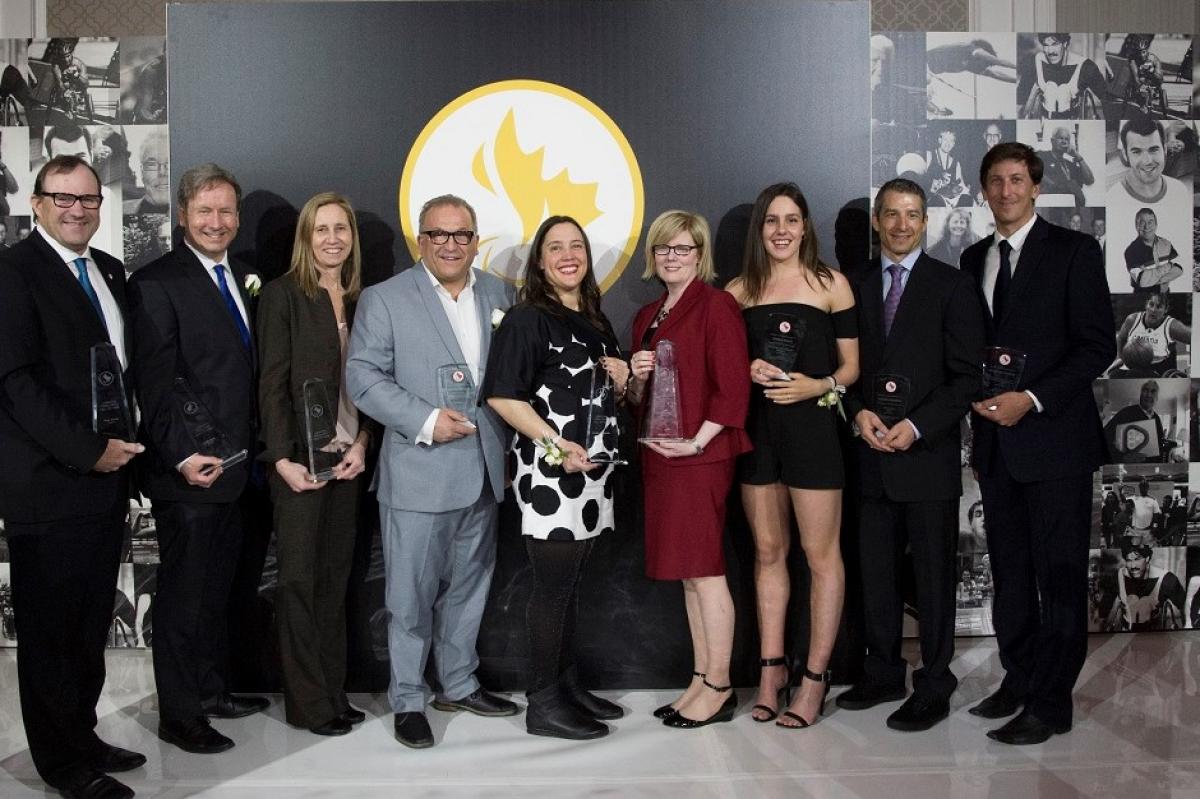 The inductees at the 2017 Canadian Paralympic Hall of Fame and Sport Awards.

“I wouldn’t be where I am today or who I am today if it wasn’t for Paralympic sport."

Swimmer Aurélie Rivard and cyclist Tristen Chernove were big winners on Friday (7 April) night at the 2017 Canadian Paralympic Hall of Fame and Sport Awards ceremony held at the Infinity Centre in Ottawa.

Rivard received the award for Best Female Athlete. She was Canada’s top medal producer at the Rio 2016 Paralympic Games, winning four medals in the pool, including three gold and one silver.

Rivard was chosen as Canada’s flag-bearer for the Closing Ceremony, named Swimming Canada’s and Swimming Word Magazine’s Female Para swimmer of the Year and was amongst the finalists for the Lou Marsh Award for Canada’s athlete of the year.

“I still feel like yesterday I was this 13-year-old girl making her first national team and never would have thought that I would be a three-time gold medallist and winning the athlete of the year award. I have my eyes on Tokyo for sure, so hopefully I can make you guys proud again in the next four years,” said Rivard.

Chernove received the award for Best Games Debut. He spearheaded a record nine-medal performance for Canada’s Para cycling team in Rio. He took gold in the time trial road race, silver in the individual pursuit and bronze in the 1000-m time trial.

Finally, Maxime Gagnon received the Development Coach of the Year Award. Gagnon is the Quebec provincial team head coach and director general of Hockey sur luge Montreal. Gagnon is credited with growing the popularity of Para ice hockey significantly in the city of Montreal and province of Quebec.

The Honourable Carla Qualtrough, Minister of Sport and Persons with a Disability, headlined a group of five individuals inducted into the Canadian Paralympic Hall of Fame.

Qualtrough was inducted in the builder category with Archie Allison and Maureen Orchard. Named in the coach category was Ozzie Sawicki and in the athlete category Karolina Wisniewska.

Qualtrough, a triple Paralympic medallist in swimming, was a key player in Vancouver’s bid to host the 2010 Winter Olympic and Paralympic Games – as president of the Canadian Paralympic Committee. As a lawyer, she was a powerful advocate for worker’s compensation and human rights before moving into the political circuit.

Sawicki was head coach of the Canadian Para Alpine Ski Team which won 12 of the total 15 medals earned by Team Canada at the 2002 Paralympic Winter Games. In 2014, he was Team Canada’s Chef de Mission in Sochi where Canada ranked third in the gold medal count -- with seven gold, two silver, and seven bronze.

Orchard revolutionised the sport of wheelchair basketball at home and abroad. She brings more than 30 years of experience and dedication to the sport. She is currently the International Wheelchair Basketball Federation (IWBF) secretary general.

Allison is a legendary figure at Toronto’s Variety Village, a centre that helps people with a disability develop a healthy lifestyle through sports, fitness and physical activity.