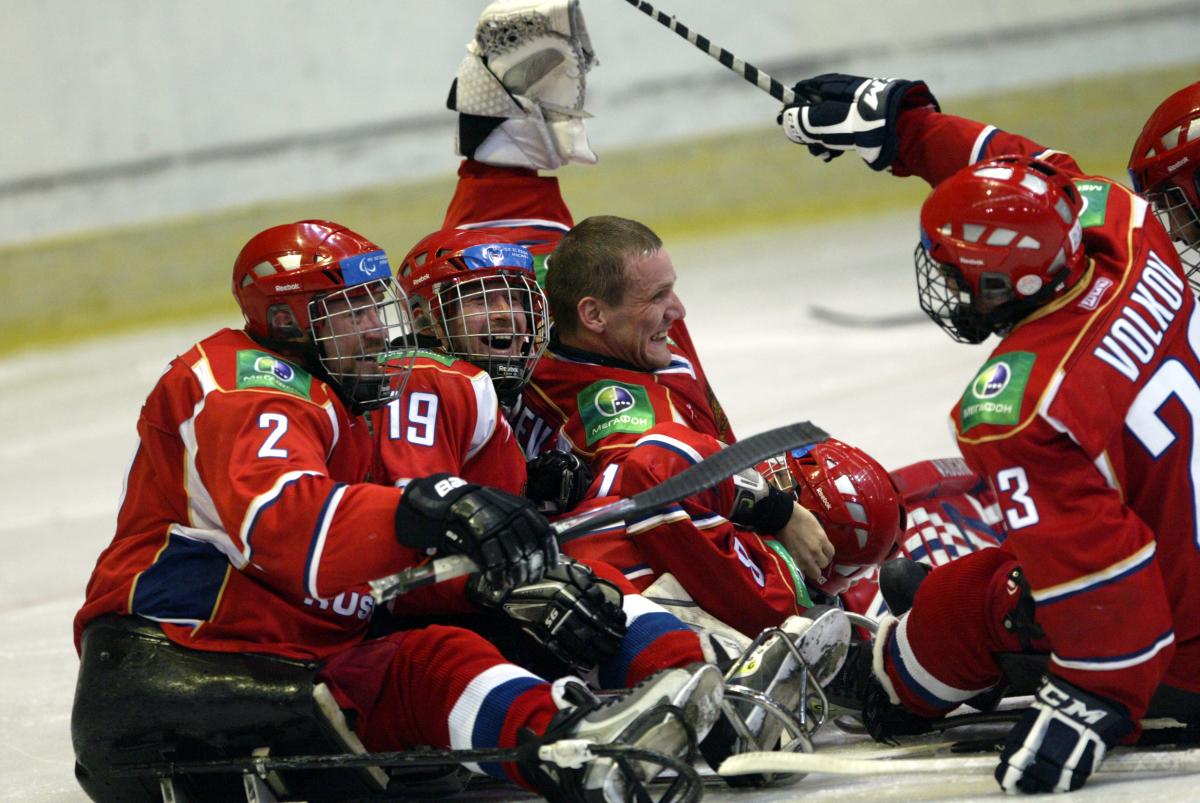 “We’ve just begun this kind of sport in Russia, and it’s great to be promoted from Pool B to Pool A in just a few years. It’s now our next task to compete with the world’s best in the A Pool and then in Sochi.”

In an intense defensive battle that came down to the final period, Russia came out on top in the gold-medal game of the 2012 IPC Ice Sledge Hockey B Pool World Championships on Saturday (November 17), defeating Sweden, 1-0, in Novi Sad, Serbia.

After just starting up their ice sledge hockey programme two years ago, the Russians can now call themselves B Pool world champions with only a little more than a year to go until they host the Sochi 2014 Paralympic Winter Games.

All it took was one goal from Engeny Petrov in the final period of the tournament to help Russia leave undefeated in the B Pool World Championships – a much better appearance for them than their disappointing seventh-place finish at the 2011 European Championships.

“It was good what we’ve done with the programme,” Russian head coach Sergey Samoylov said.

“We’ve just begun this kind of sport in Russia, and it’s great to be promoted from Pool B to Pool A in just a few years. It’s now our next task to compete with the world’s best in the A Pool and then in Sochi.”

The Russians almost had a couple of goals earlier, but Petrov’s shot to a wide-open net with 11 minutes left in the second period went wide and Ivan Kuznetsov’s attempt nearly five minutes later against another wide-open net banked off the post.

Russia outshot Sweden in the game, 20-9, with Niklas Ingvarsson leading the silver medallists’ effort with four shots on goal.

Because they finished first and second in Novi Sad, both Russia and Sweden will now move to the A Pool for next season.

Germany won the bronze-medal game after dominating Poland, 8-1, as Sebastian Kessler netted a hat trick and had 12 shots on goal, and team captain Frank Rennhack notched a goal to go along with his top aggressive play on the defensive end.

“We thought we would be leaving here going to the A Pool, but that’s not the way it went,” Rennhack said. “It was tough at the beginning, especially our first game against Russia, but then we got better and it was good to finish in third place with a win today.”

The contest started off a close battle, with top defensive efforts from both sides, until Kessler scored his first goal of the night five minutes into the second period.

Sylwester Flis immediately responded with a goal for Poland, but then Jacob Wolff broke open the scoring charge for Germany just two minutes later. Within the span of five minutes, Wolff, Bas Disveld, Udo Segreff and Kessler all scored for Germany to make it 5-1.

Another goal by Kessler, a score by Rennhack and one by Bernhard Hering in the third period helped Germany ease their way to bronze.

Lars Uhlemann and Simon Kunst shared the goalkeeping duties for the winning side, combining to record 11 saves.

In the fifth-place game, the Netherlands came out strong to pick up their first win of the Championships and defeat Austria, 4-1, as Micheal Ten Hoeve scored twice, recorded 14 shots on goal and won Dutch Player of the Game for the third time in the tournament.

Ten Hoeve scored just 2:38 into the game to give the Dutch the early edge, and then team captain Herman van Dorsten came up with a big shot in the second period to make it 2-0.

The Netherlands’ Bas Akkerman found the back of the net a couple of minutes after van Dorsten, and then Sandro Kalegaris immediately countered it with the only goal of the game for Austria.

Ten Hoeve closed out the game with another goal with just 1:20 remaining in the contest.

“This tournament was tough, but we did improve a little bit,” van Dorsten said.

Germany's Jorg Wedde, left, holds of a Polish skater during the bronze-medal game in Novi Sad.