The IPC President honoured all the Paralympic Winter Games volunteers during the Closing Ceremony. 16 Mar 2014
Imagen 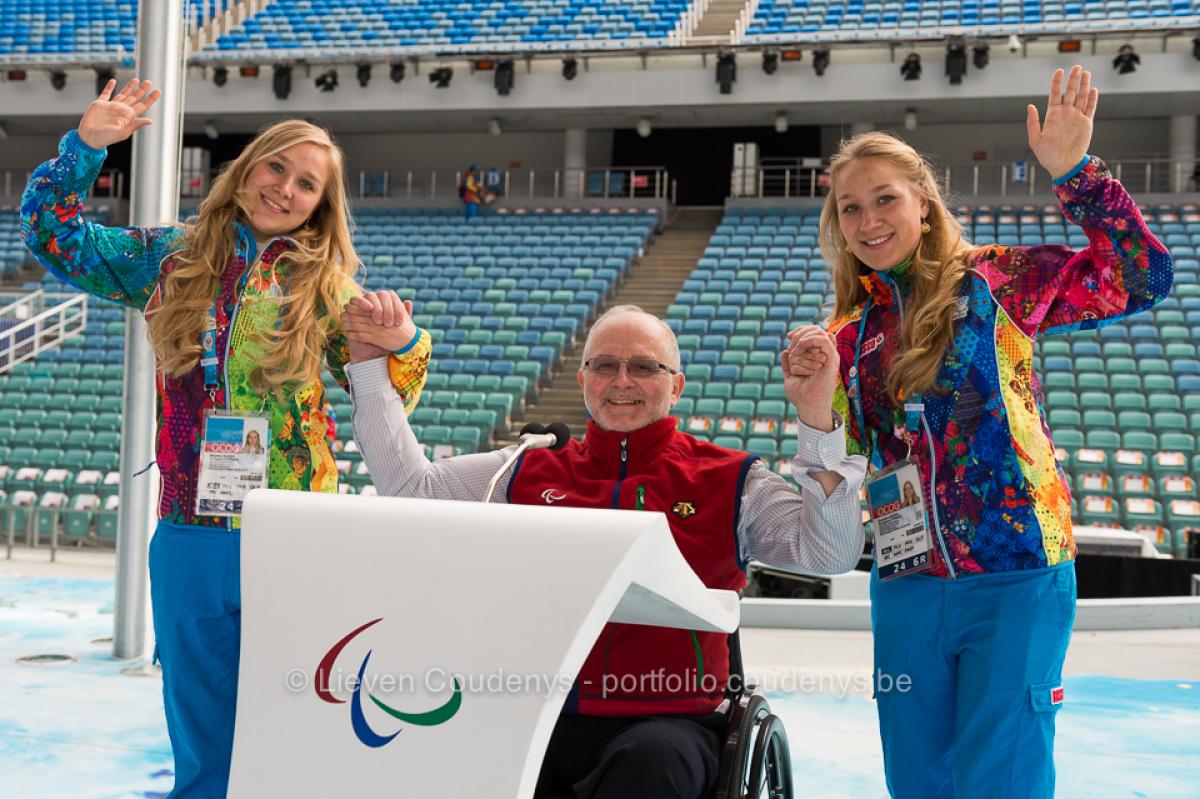 IPC President Sir Philip Craven with Ekaterina and Elizaveta Gulina, his assistants in Sochi during the Olympic and Paralympic Games

“It was a once-in-a-lifetime opportunity to be on stage with the IPC President representing all the volunteers. We were delighted to accept even though we were very, very nervous.”

IPC President Sir Philip Craven has hailed the 8,000 volunteers who were instrumental in the success of the Sochi 2014 Paralympics by saying Die pyat volonteru – Russian for "high five" to the volunteers – during his closing ceremony speech.

On stage with Sir Philip during his address to receive "high fives" were volunteers Ekaterina and Elizaveta Gulina, twin sisters from Moscow who for the last six weeks have acted as the IPC President’s assistants in Sochi during the Olympic and Paralympic Games.

The 20-year-olds who are studying Business and Culture at the International University in Moscow, at first did not believe it when Sir Philip invited them to join him on stage during the ceremony.

“I thought he was kidding us.” explained Ekaterina. “Then all I wanted to do was call my mum and my friends and tell them the good news.

“My mum then told me to call our gran as she was kept looking out for us on TV during the Games.

“It was a once-in-a-lifetime opportunity to be on stage with the IPC President representing all the volunteers. We were delighted to accept even though we were very, very nervous.”

“I think the TV audience was probably huge as we called all our friends and told then to watch,” joked Elizaveta who added that by wearing the Sochi 2014 volunteers’ uniform it was relief not to have to worry about an outfit for her appearance on the world stage.

Like thousands of others, the twin sisters applied to be Sochi 2014 volunteers after being involved in a number of other major sporting events, including last year’s Universiade in Kazan, to gain valuable work experience.

They then first met Sir Philip at the 2013 Chef de Mission seminar and put forward their names to be his assistants during the Olympics and Paralympics.

“For the Olympics he was an IOC member, and then one week later he became the IPC President. But he never changed. He’s so relaxed and so easy to work with him. He’s very kind. We had no problems with him,” added Elizaveta