With the Vancouver 2010 Paralympic Winter Games little over a year away, the Sochi 2014 Organizing Committee (Sochi 2014) is beginning to gather their official support team. 15 Dec 2008 By IPC

The Sochi 2014 Paralympic Winter Games will take place from 7-16 March, 2014, and the committee is currently putting together groups of people who are interested in recruiting volunteers from around the world. The President and CEO of Sochi 2014, Dmitry Chernyshenko, welcomed participants of a forum just last week in St. Petersburg, Russia, on “Volunteering as a form of social education and young people.” The event attracted the heads of many volunteer programmes from a total of 80 different countries.

Chernyshenko said that Sochi 2014 is planning to recruit 25,000 volunteers to prepare and host Russia’s first Olympic and Paralympic Winter Games.

The President and CEO said that as organizers of the Paralympic Winter Games, all volunteers will be playing a vital role, and their work will reflect the image of a new Russia. This recruitment of volunteers will also be presented as a vehicle for the education of the younger generation. The week also included the All-Russian Volunteer Organization “Sport Russia” hosting the first international “Professional Training of Sports Managers” Online Conference.

The conference made clear that education for the Games is a key activity for Sochi 2014. A full education programme will begin in March 2009, coinciding with the Vancouver 2010 Paralympic Winter Games.

Sochi 2014 is working in partnership with the Russian Ministry of Education and Science, and will ensure that the educational projects to support the delivery of the Games will also improve public education standards in areas such as language training. 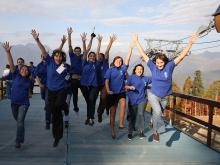