Channel 4 today outlined its plans for the most extensive coverage of the Paralympic Games that has ever been broadcast in the UK.

More than 150 hours of all-day everyday coverage will be broadcast during the twelve days of the London 2012 Paralympic Games. Multiple channels and platforms will broadcast live sport on Channel 4, More4 and online at Channel4.com.

In addition, Channel 4 will broadcast three further streams of uninterrupted live coverage ofa range of sports at the Paralympic Games. These will be available as three dedicated channels on the Sky platform, in both standard and high definition – as well as online at Channel4.com.

Channel 4 has also announced the launch of dedicated Paralympics apps for both mobile and tablet devices – compatible with iOS and Android. The apps, which will be free to download, will enable users to review the latest Paralympic action with comprehensive catch up clips of events. The tablet app will also allow users to watch live streamed action. The apps and the Channel4.com/Paralympics website will also feature continuously updated live text commentary, news, results and medal tables.

The coverage will be hosted by a ground-breaking team. Half of the presenters and reporters in the Channel 4 line-up will have an impairment – including eight new faces drawn from a nationwide talent search.

Channel 4 today confirmed the on-air pairings who will front the all-day everyday coverage.

Former Paralympian and Channel 4 regular, Ade Adepitan, joins leading broadcaster, Clare Balding, to host Channel 4’s daily peak time coverage. The acclaimed Australian comedian and broadcaster, Adam Hills, will wrap up all the events of the day in a highlights show with a difference.

Established Channel 4 news anchor, Jon Snow, will front the coverage of both the Opening and Closing ceremonies.

Paralympic Show which, since launching in 2010 has had over 30 episodes aired on the channel. There is also the return of the feature documentary series, Best of British, following Paralympics GB hopefuls on their road to the Games; and a number of high profile short films commissioned jointly by Channel 4’s broadcast partners, Sainsbury’s and BT. 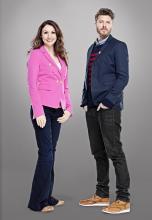