Italy inflicted a first defeat on the USA, as Spain, Great Britain and Australia maintain their unbeaten records at the 2014 World Wheelchair Basketball Championships. 08 Jul 2014
Imagen

USA's men's wheelchair basketball team followed up their bronze-medal finish at London 2012 by winning the 2013 Americas Cup in Bogota, Colombia.

“They played a really physical style of defence and we didn’t get some of the calls that we wanted but that’s the way the game was refereed both sides, we’ve got to be tougher and take better care of the ball.”

There was an upset on day four (8 July) at the 2014 men’s World Wheelchair Basketball Championships in Incheon, South Korea, as the USA tasted defeat for the first time at the hands of Italy.

The tournament is currently in the second group phase, with the top three teams from the original groups now competing in either Group E or F.

After remaining unbeaten during their first three games to top group C, the USA would have been expected to beat Italy, who scraped through in third place from their group.

However, the Italians did not look troubled throughout this encounter, however, winning every quarter to ensure that they beat the USA 54-41.

Great Britain maintained their unbeaten record despite being pushed hard by Iran. After the first quarter, they were sitting comfortably in the lead, but 18 points in the second quarter from Iran cut GB’s lead to just one at half-time.

In the third quarter, Great Britain added another four points to their lead before tying the fourth at 17 points apiece to ensure that they ran out eventual 64-59 winners.

Speaking to British Wheelchair Basketball, Great Britain’s Gaz Chowdry said: “Really tough game today, at this stage there is no easy game and Iran played really well. They ran us all the way and we are glad we came away with the win.

“They played a really physical style of defence and we didn’t get some of the calls that we wanted but that’s the way the game was refereed both sides, we’ve got to be tougher and take better care of the ball.”

In a high scoring first half, Australia led by 12 heading into the break. This dominance continued in the third and was enough to see them home despite a small Colombian revival in the fourth quarter, leaving the scores at 46-62 to Australia.

The last unbeaten side left in the tournament, Spain, were easy winners against Argentina in group E. The Europeans dominated every quarter to quash their opposition.

This included a rampant fourth quarter where Spain posted 19 points compared to Argentina’s four, leaving the final scores at 63-30 which more than improves their points difference.

Meanwhile, the teams that finished bottom of their initial groups are now competing in group G for ranking. Sweden got their second victory of the tournament with a 75-58 win over Algeria, whilst Mexico picked up their first win in a closely fought 59-55 victory over the Netherlands.

For more information on the tournament, visit the official website of the 2014 men’s World Wheelchair Basketball Championships. 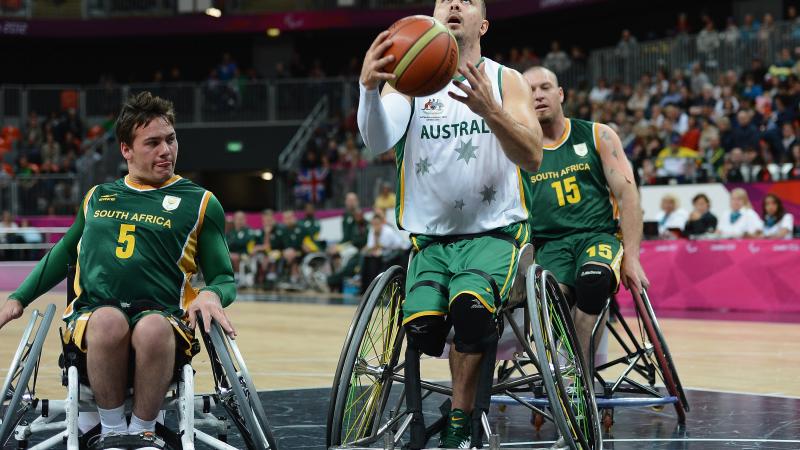