"I am excited to have an opportunity to work with the U.S. Olympic Committee and eager to bring my experience and passion for nordic sport into the U.S. Paralympic programmes."

John Farrahas has been named director of the U.S. Paralympics nordic skiing high performance programme. The move is part of the USOC's continued commitment to improving Team USA's success and advancing elite Paralympic sport in the U.S.

Farra was previously a member of the U.S. Ski Team, competing at the world championship and Olympic levels, and currently serves as the nordic program director for the U.S. Ski and Snowboard Association, a position he has held since 2008.

"I'm pleased John will be joining the team to take on these responsibilities with the Paralympic nordic programme," said USOC Chief of Sport Performance Alan Ashley. "I've had the opportunity to work with John through the years, and his leadership and experience will be a key contributor in our effort to build a world class program for the future."

In the high performance position, Farra will lead the annual and quadrennial high performance planning for the USOC's Paralympic nordic program, collaborate with key partner organizations and ski clubs to build a stable and elite pipeline of athletes and coaches, direct designated national team activities and continue to identify, train and support athletes who have the talent to pursue excellence at the Paralympic Winter Games. He will initially be based in Park City, Utah.

"I am excited to have an opportunity to work with the U.S. Olympic Committee and eager to bring my experience and passion for nordic sport into the U.S. Paralympic programs," said Farra. "The position will provide me new professional challenges and goals as we aim to build comprehensive medal-contending programs for cross country and biathlon."

Farra is the former vice president for the Maine Winter Sports Center and has close ties with the National Sports Academy in Lake Placid, N.Y. having attended the Academy as an athlete and later was the assistant head of school following his retirement from competitive ski racing. 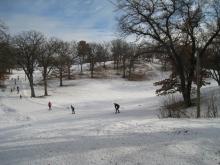 The IPC World Cup event get underway in the USA