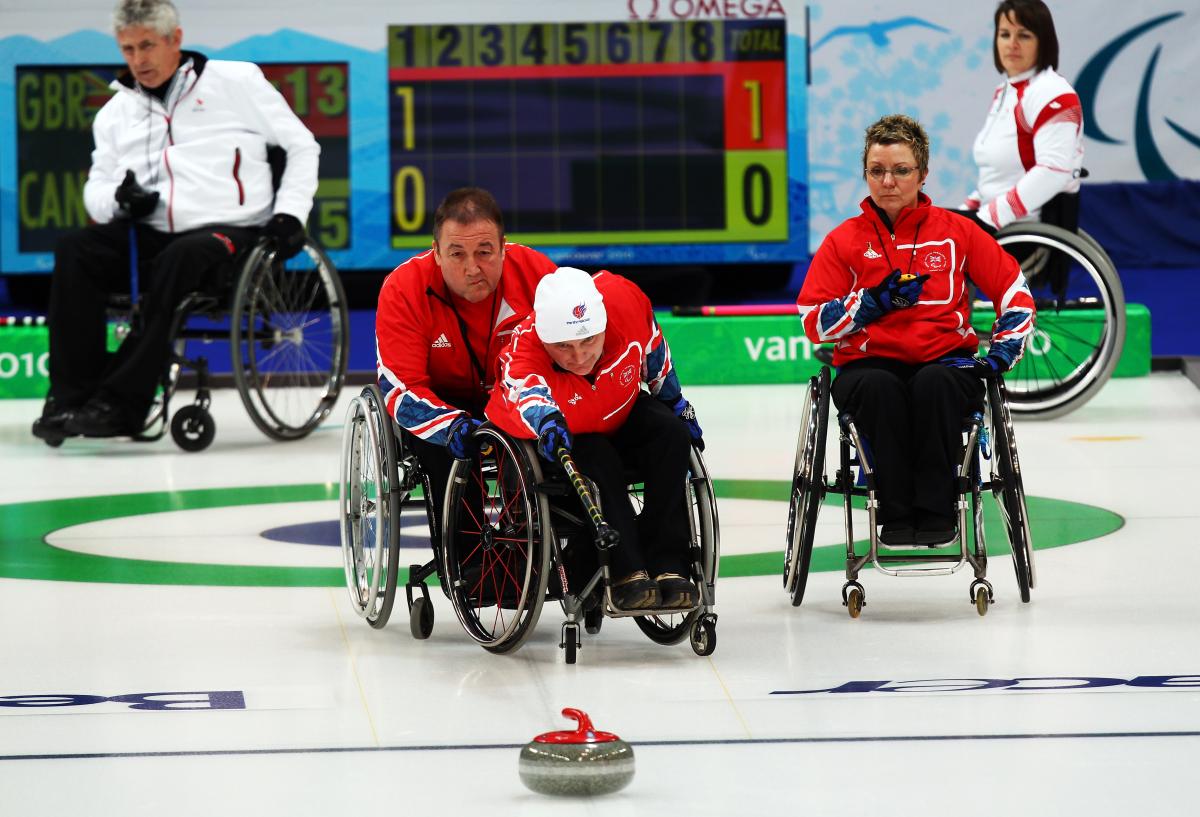 The home Wheelchair Curling team did not disappoint in the opening round of action at the 2010 Paralympic Winter Games today. Canada’s defending Paralympic champions, led by Jim Armstrong, put on an impressive show en route to a 9-2 win over Great Britain’s Michael McCreadie rink in front of 2,459 fans at the Vancouver Paralympic Centre.

Also posting wins in draw one were USA’s Augusto Perez, Switzerland’s Manfred Bolliger and Germany’s Jens Jaeger. Perez, who also competed in the 2006 Winter Paralympics in Torino, shrugged off a slow start to defeat Korea’s Haksung Kim rink, 9-6. Bolliger’s Swiss team scored a critical deuce to earn a 7-6 win over Sweden’s Jalle Jungnell. Germany scored a huge six-ender late in the game with Norway to take down the two-time world champions. Germany, Korea and Japan are making their Paralympic debuts today. Ten teams are competing here, up from eight in 2006 in just the second time wheelchair curling will be contested as a medal sport at the Paralympics. Today’s attendance was 2,459.

Yoji Nakajima led his Japanese team to a 9-6 win over Italy in the country’s debut at the 2010 Paralympic Winter Games in round robin action tonight at the Vancouver Paralympic Centre.

Japan, which features a 75-year-old “youngster” at the second position, allowed Italy’s Andrea Tabanelli to score three points in the first end but countered with six points over the next three ends and never lost the lead. Korea, which lost earlier today to the US, bounced back to earn its first win as well in the country’s first Paralympic appearance. Haksung Kim led a balanced attack to defeat Sweden, 8-4, to improve to 1-1.

Canada’s Jim Armstrong rink dominated Augusto Perez and Team USA for a 10-5 win to keep its perfect record intact. Armstrong’s Canadians capitalized on key opportunities to steal multiple ends and build a lead that proved insurmountable for the Americans.

Norway’s Rune Lorentsen rink rebounded from a tough loss in the first draw to defeat Michael McCreadie’s Great Britain squad, 7-5. Norway, winner of two previous world wheelchair titles, fell behind early but too command in the third end and scored a key deuce in the final frame to earn the win.