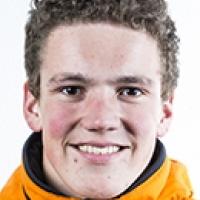 When and where did you begin this sport?
He took up the sport in 2006 on an artificial ski slope in Huizen, Netherlands.
Why this sport?
His parents enjoyed skiing and encouraged him to try the sport.
Name of coach
Nick Elsewaerd [national], NED; Falco Teitsma [national], NED
Training Regime
Off the slopes he trains two sessions, five days a week for a total of 30 hours. Two days a week he trains at the Olympic Training Centre in Papendal, Netherlands, and three days he trains in his gym at home.

Most influential person in career
Coach Nick Elsewaerd. (Athlete, 07 Mar 2018)
Sporting philosophy / motto
"It's important to stay positive in life and have perseverance. And with this in mind try to push your limits." (nielsdelangen.com, 12 Dec 2014)
Ambitions
To win gold at the 2022 Paralympic Winter Games in Beijing. (herautonline.nl, 04 Nov 2020; nielsdelangen.com, 04 Nov 2020)
Impairment
At 11 months old he contracted meningococcal septicaemia. As a result of the illness his left leg was severely damaged and his right leg was amputated below the knee. In 2013 he injured his left foot and was unable to walk for six months. He tried running again but the pain in his knee prevented him from doing so and having been told that the problem could not be resolved, his left leg was amputated in 2015. (nielsdelangen.com, 17 Dec 2018; nskiv.org, 2016; gelderlander.nl, 27 Dec 2015)
Other information
SPORT AND STUDY BALANCE
He balances his training and competition with his studies in physiotherapy at the HAN University of Applied Sciences in Nijmegen, Netherlands. "It takes me a little longer [studying], because I'm away a lot from August to March. Most students exercise more in the summer and for me it is just about collecting modules. I also have to do a lot of self-study and it is not the easiest thing to combine it with training. But I really like it and it will pay off." (herautonline.nl, 04 Nov 2020)