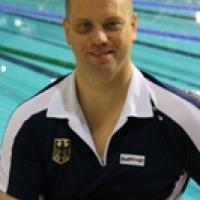 When and where did you begin this sport?
He took up the sport in 2001.

Hobbies
)
Injuries
He injured his right arm in 2008 during training and was not able to compete for 18 months. (berliner-zeitung.de, 17 Jun 2010)
Awards and honours
In November 2012 he received the Silbernes Lorbeerblatt [Silver Laurel Leaf] for winning a silver medal at the 2012 Paralympic Games in London. (bundespraesident.de, 07 Nov 2012)
Impairment
He has paraplegia after a mountain bike accident at age 21. (berliner-woche.de, 15 Jan 2015)
Other information
MEDAL DENIED
At the 2008 Paralympic Games in Beijing he was presented with his first Paralympic medal, a bronze in the SB5 100m breaststroke, only to have the medal taken away and be demoted to fourth place after an initial disqualification of the race winner was overturned. (tagesspiegel.de, 16 Mar 2010)