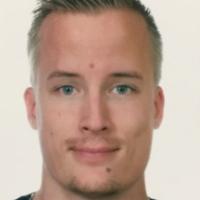 When and where did you begin this sport?
He took up athletics at age 14 in Karlskrona, Sweden.
Why this sport?
He was involved in Para dance sport as a boy and was asked by another dancer if he wanted to go to the 2005 Swedish Youth Games. He accepted the offer and his athletics career progressed from there.
Club / Team
IFK Vaxjo: Sweden
Name of coach
Ingela Nilsson [personal, national], SWE, from 2012

"If it is to be, it is up to me." (Athlete, 22 Oct 2015)
Other sports
He has competed in Para dance sport and was Swedish national champion in 2010 and 2011. He has also represented Sweden in wheelchair handball, winning bronze at the 2016 European Championships. (Athlete, 16 Dec 2010; shif.se, 28 Nov 2010; funkaforlivet.blogspot.com, 09 Jun 2017)
Ambitions
To compete at the 2020 Paralympic Games in Tokyo. (sverigesradio.se, 13 Mar 2018)
Impairment
He has spina bifida. He used crutches until age seven, at which point he got a wheelchair because he realised it helped him move around faster. At age 14 he received a racing chair. "Competition is very fierce, but Michael Phelps is built to swim and I'm built to run a racing wheelchair." (svt.se, 20 Jun 2012)
Other information
WHEELCHAIR DANCING
He says that wheelchair dance has helped him improve in athletics, and vice versa. "I get the agility for athletics through dance and the fitness to dance from athletics." (bltsydostran.se, 01 Jun 2012; sverigesradio.se, 09 May 2012)

COMMENTATOR
Having failed to qualify for the 2016 Paralympic Games in Rio de Janeiro, he was approached by Swedish Radio to be an expert commentator for Para athletics. "To get to be a commentator along with Jacob Hard [Swedish journalist] during those two weeks became an experience for life. Not just because of the incredible achievements we got to experience and share, but also because of the knowledge of how things work on the other side of the camera." (funkaforlivet.blogspot.com, 09 Jun 2017)