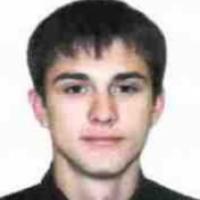 When and where did you begin this sport?
He took up the sport at age 15 in Moscow, Russian Federation.
Why this sport?
A family friend, Alexander Abramov, told him about Para ice hockey and took him to watch the sport. Terentyev enjoyed it immediately.
Club / Team
SHC Ugra: Khanty-Mansiysk, RUS
Name of coach
Alexander Zykov [club], RUS; Ruslan Batyrshin [national], RUS
Preferred position / style / stance / technique
Forward

He was named Best Goalscorer at the 2018 International Ugra Cup in Khanty-Mansiysk, Russian Federation. (ugra-news.ru, 12 Nov 2018)

He has received the title of Honoured Master of Sport in the Russian Federation. (minsport.gov.ru, 26 Apr 2021)
Milestones
At age 17 he was the youngest player in the Russian national Para ice hockey squad at the 2014 Paralympic Winter Games in Sochi. He was also the youngest player to compete in the 2013 Russian Championship. (paralympic.org, 14 Feb 2014; rezeptsport.ru, 08 Mar 2013)
Ambitions
To win gold medals at the Russian championship, European championships, world championships, and the Paralympic Winter Games. (Athlete, 28 Oct 2020)
Impairment
At age 13 he was involved in a train accident that resulted in the amputation of both his legs. (ugra-news.ru, 28 Feb 2020)