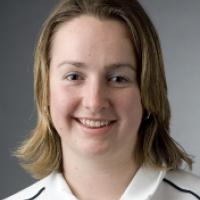 When and where did you begin this sport?
She began competing in 2006
Club / Team
Glenhuntly Athletics Club: Melbourne, VIC, AUS
Name of coach
Mike Edwards [club]

Most influential person in career
Coach Mike Edwards. (paralympic.org.au, 11 Jan 2010)
Hero / Idol
Her parents. (paralympic.org.au, 11 Jan 2010)
Injuries
In May 2015 a hand injury required surgery and kept her from throwing for four months. (Facebook page, 07 Sep 2015)
Sporting philosophy / motto
"Don't be afraid of who you are." (paralympic.org.au, 11 Jan 2010)
Impairment
She has cerebral palsy as a result of being involved in a car accident in 2004. The accident left her in a coma for 80 days and also left her blind in one eye and partially deaf. (heraldsun.com.au, 10 Dec 2008)
Other information
AWARENESS FILM
She appeared in a film called Sudden Impact during the lead up to the 2008 Paralympic Games in Beijing in an effort to raise awareness about injuries suffered from motor vehicle accidents. (athletics.com.au, 21 Jan 2011)