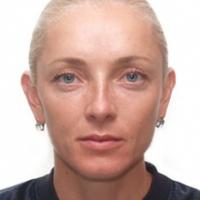 When and where did you begin this sport?
She took up the sport in 1998 in Mena, Ukraine.
Why this sport?
She got involved in sports after coach Nadezhda Taratukhina visited her school and invited the students to a training session. She got her first taste of the long jump at a local competition. Hurdling and high jump were not included in the programme so she competed in long jump and, to her surprise, won the competition. A lack of interest meant it was some years before she pursued the discipline, which came only after encouragement from coach Yury Gorbachenko.
Name of coach
Mykola Mamchur [personal], UKR, from 2015

Memorable sporting achievement
Winning gold medals in long jump at the Paralympic Games in 2008, 2012 and 2016. (luxpersons.com, 14 Dec 2017)
Most influential person in career
Coach Mykola Mamchur. (Athlete, 22 Oct 2015)
Sporting philosophy / motto
"The most important thing in sports is to love sports." (luxpersons.com, 14 Dec 2017)
Awards and honours
She holds the title of Honoured Master of Sport in Ukraine. (dsmsu.gov.ua, 28 Dec 2019)