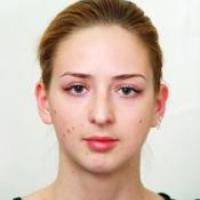 When and where did you begin this sport?
She began swimming seriously at age nine in Moscow, Russia. She had grown up practising the sport, and took it up again two months after the bus crash in which she lost her left arm.
Why this sport?
Before she began training, she studied classical ballet, attended music school and studied English. When she went to the pool, she wanted to become a swimmer right away. As swimming became more important to her, she eventually dropped ballet, then dropped music, and finally dropped English.
Club / Team
Youth of Moscow: Russia
Name of coach
Sergey Zhilkin, RUS, from 2006

She received the Order of Honour in recognition of her performance at the 2012 Paralympic Games in London. (pravo.gov.ru, 10 Sep 2012)

For her performance at the 2008 Paralympic Games in Beijing, she received the Order of Friendship from the president of the Russian Federation. (kremlin.ru, 30 Sep 2009)

In 2008 she received the Comeback in Life Award from the Russian Paralympic Committee. (stadium.ru, 23 Dec 2008)
Other sports
She was a professional able-bodied swimmer for 10 years before her accident. (paralympic.org, 31 Jul 2011)
Ambitions
To work in regional sports, to stay in Russia and help improve the situation for people with an impairment, and to see the world and raise a family. (nasha-molodezh.ru, 25 Mar 2013; ampgirl.ru, 15 Jan 2013; newizv.ru, 17 Sep 2008)
Impairment
At age 20 her left arm was amputated after the bus she was travelling on with a friend in Thailand was involved in an accident. Her friend Aleksandra died in the crash and despite four operations, doctors were unable to save Vladykina's arm. After she won gold at the 2008 Paralympic Games in Beijing, she dedicated the victory to her friend. (atu.ru, 09 Nov 2012; sochi2014.com, 20 Mar 2010; newizv.ru, 17 Sep 2008)