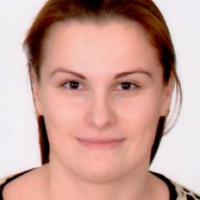 When and where did you begin this sport?
She began training in the sport in 2003 in Kropyvnytskyi, Ukraine.
Why this sport?
She has enjoyed spending time in the water since childhood.
Club / Team
Kropyvnytskyi Youth Sports School No.1: Ukraine
Name of coach
Olena Kuznitsova [personal], UKR, from 2006

In recognition of her performance at the 2016 Paralympic Games in Rio de Janeiro, she received the Order of Princess Olga [second class] in Ukraine. (president.gov.ua, 04 Oct 2016)

She was among the six nominees for the 2014 Laureus World Sportsperson of the Year with a Disability award. (laureus.com, 26 Mar 2014)

She received the 2013 Sports Heroes of the Year national award in Ukraine. (paralympic.org.ua, 22 Apr 2014)