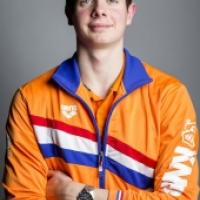 When and where did you begin this sport?
He was involved in swimming before his accident in 2009. He began Para swimming during his rehabilitation.
Why this sport?
Before his accident he was into sports like swimming, football, tennis and horse riding. After a six-month period of rehabilitation, he learned to walk and swim again. He joined his former swimming club, DZ and PC Drachten, and says he now swims even faster than before his accident. He also took up the sport because he feels free in the water.
Club / Team
Bossche Zwemvereniging [BZV]: 's-Hertogenbosch, NED

Memorable sporting achievement
Winning silver in the S10 100m backstroke at the 2016 Paralympic Games in Rio de Janeiro. (stellingwerfcollege.nl, 28 Feb 2017)
Injuries
In April 2017 he required surgery after he was diagnosed with appendicitis. (zwemkroniek.com, 05 Apr 2017)
Awards and honours
He was named the 2011 Young Person of the Year by the youth magazine '7Days' in the Netherlands. (jeugdjournaal.nl, 20 Jan 2012)
Ambitions
To win gold at the Paralympic Games. (stellingwerfcollege.nl, 28 Feb 2017)
Impairment
He was involved in a horse riding accident in 2009 that resulted in the amputation of his left leg below the knee. (sevendays.nl, 13 Nov 2014; nieuweooststellingwerver.nl, 11 Jan 2011)
Other information
EARLY LIFE
He lived in Vietnam for the first three years of his life before moving to Jakarta, Indonesia, at age six with his family. He spent three years in Jakarta, where he attended the Netherlands International School [NIS]. (sporttop.nl, 2015)