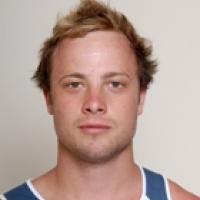 When and where did you begin this sport?
He switched to running track around the age of 16 after spending most of his childhood playing rugby, water polo and tennis.
Why this sport?
In January 2004, he shattered his right knee on the rugby field and doctors recommended that he switch to running track.
Club / Team
University of Pretoria: Pretoria, RSA
Name of coach
Ampie Louw
Coach from which country?
South Africa
Coach from what year?
2003

Superstitions / Rituals / Beliefs
He does a silent prayer to his late mother before every race. (dailymail.co.uk, 19 Aug 2011)
Sporting philosophy / motto
"You're not disabled by your disabilities, but abled by your abilities." (Athlete, 23 Jan 2011)
Awards and honours
When he ran at the London 2012 Olympic Games, he became the first Paralympian track and field runner to compete in an able-bodied Olympiad and the third Paralympian to compete in the able-bodied Olympics overall. (edition.cnn.com, 5 Aug 2012)

He became the first amputee to compete at an able-bodied world championships when he competed at the 2011 event in Korea. (dailymail.co.uk, 19 Aug 2011)

In December 2007, he was awarded the BBC Sports Personality of the Year Helen Rollason Award, which is given for outstanding courage and achievement in the face of adversity. (oscarpistorius.co.za, 01 Mar 2010)

In 2006, he was conferred the Order of Ikhamanga in Bronze [OIB] by the President of South Africa for outstanding achievement in sports. (oscarpistorius.co.za, 01 Mar 2010)
Other information
DISABILITY
Born without the fibula in both legs, he was eleven months old when his parents made the decision to have his limbs amputated below the knee. His mother wrote a letter to him at the time of the amputation. It read, "The real loser is never the person who crosses the finishing line last. The real loser is the person who sits on the side. The person who does not even try to compete." (ossur.com, 01 Mar 2010; dailymail.co.uk, 19 Aug 2011)

BLADES
The 'J' shape carbon fibre 'feet' or 'blades', known as flex-foot Cheetahs, that he runs on are custom-built by Iceland-based prosthetics company Össur. He first started running with them in June 2004. (stream.wsj.com, 4 Aug 2012; oscarpistorius.com, 02 Sep 2011)

2011 INTERVIEW WALK-OUT
He walked out of a BBC radio interview in September 2011 after taking offence to a question on him competing in able-bodied competition. The reporter asked whether he could be viewed as an 'inconvenient embarrassment' to South African athletics officials and the IAAF 'because, effectively, you're taking them into uncharted ethical waters'. Pistorius replied: "I think that's an insult to me and I think this interview is over." (smh.com.au, 07 Sep 2011)

OLYMPIC BID
He became the first athlete with a disability to achieve an Olympic qualifying standard when he ran 45.07s in Lugnano, Italy, in 2011. The run made him eligible for selection for the 2012 Olympic Games in London after he missed the 2008 Games in Beijing. In 2008 he was initially banned from competing in able-bodied competition by the International Association of Athletics Federations [IAAF] due to their belief that the prosthetic limbs gave him an unfair advantage. He successfully overturned the ban through the Court of Arbitration for Sport [CAS] but he would ultimately miss out on selection for Beijing due to failing to post a qualifying time. However, the same would not happen in 2012, as he was named to represent South Africa in the individual 400m race and the 4x400m relay. (BBC, 16 May 2008; BBC, 18 Jul 2008; dailymail.co.uk, 21 Jul 2011; insidethegames.biz, 04 Jul 2012)

TRAGEDY
His mother died aged 42, when he was 15 years old, after an allergic reaction to medication. The date she was born and the date she died are tattooed on the inside of his arm. (dailymail.co.uk, 19 Aug 2011)