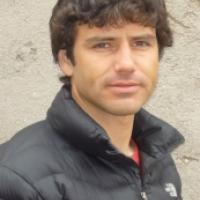 When and where did you begin this sport?
He began the sport in 2003 at the Crested Butte Mountain Resort in Colorado, United States.
Why this sport?
He loves the mountains, and found that he had good endurance.
Club / Team
Chapelco Ski School for the Adapted: San Martín, ARG
Name of coach
Claudia Vega Olmos [club], ARG, from 2012; Marcelo Campanaro [personal], ARG, from 2012;

He was chosen as Argentina's flag bearer for the opening ceremony of the 2014 Paralympic Winter Games in Sochi. (paralympic.org, 07 Mar 2014)
Other sports
Before his accident he played basketball at provincial level in Argentina. (rusiahoy.com, 07 Jan 2014)
Impairment
He lost his right leg in 1991 in a motorbike accident. He was travelling on a scooter with his friend when a car hit them and they were thrown into a gutter at the side of the road. "First thing they did was call my mother and ask her for permission to amputate my leg. The leg was in a pretty bad state and it had been in contact with dirty water from the gutter, and that's what happened. They tried to save the leg during the following week, but they couldn't." (virginiaelizalde.com, 29 Jan 2013)
Other information
OCCUPATION
He works as a para-ski instructor at the Chapelco Ski Resort in San Martin de los Andes, Argentina. (Facebook profile, 17 Dec 2014)