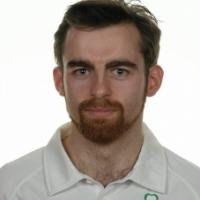 When and where did you begin this sport?
He took up Para athletics in September 2014 in Dublin, Ireland. He entered his first competition the following January in Athlone, Ireland.
Why this sport?
After finishing his studies in pharmacy, he decided that he wanted to become a professional athlete. His neighbour, Irish Olympic hurdler Sean Cahill, put him in contact with the head of the Irish national Para athletics team. "I remember walking down the street one night and the thought just came into my head 'I want to be an athlete'. I went on a 20-minute walk and over that time I formulated the entire plan to quit pharmacy, start training to be an athlete, go to Rio, do the Paralympics and by the time I got home I had the whole plan formulated. Watching the 2012 Paralympic Games in London put the idea into my head."
Name of coach
John Shields, IRL, from 2015
Training Regime
He trains six times a week at either Morton Stadium or the Sport Ireland Institute in Dublin, Ireland.

In 2015 an injury prevented him from competing until June. (the42.ie, 29 May 2016)
Ambitions
To compete at the 2020 Paralympic Games in Tokyo. (Instagram profile, 12 Jun 2018)
Impairment
In 2009 he sustained a brain haemorrhage after he was elbowed in the head while playing Gaelic football. On his 17th birthday he was diagnosed with an aneurysm in his brain and was forced to undergo surgery. During the operation he had a stroke, which resulted in paralysis on the left side of his body. (Athlete, 12 Jul 2017; the42.ie, 29 May 2016)
Other information
OLYMPIC HEARTACHE
He was disqualified from the T37 400m event at the 2016 Paralympic Games in Rio de Janeiro, due to a false start caused by his impairment. "I get twitches every so often as a result of my condition. I got a twitch at the start line and it was deemed a false start. One false start and you're out of the Games. A lot of people had the same issue, but that didn't change things. I'm more than capable of running 400m but normally at 300m my impairment flares up, but I'm working on it." (rte.ie, 15 Sep 2016; thejournal.ie, 09 Feb 2018)