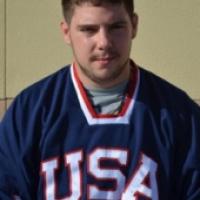 When and where did you begin this sport?
He took up Para ice hockey in 2010 at the Walter Reed National Military Medical Center in Bethesda, MD, United States of America.
Why this sport?
He played ice hockey before his injuries and fulfilled his dream to get back on the ice as a member of the USA Warriors, a Para ice hockey programme for injured US armed forces personnel, for whom he played from 2010 to 2012.
Club / Team
Buffalo Sabres: United States
Name of coach
Guy Gosselin [national], USA
Preferred position / style / stance / technique
Forward

Hobbies
Reading, riding his all-terrain vehicle. (teamusa.org, 2017)
Most influential person in career
His family. (Athlete, 06 Mar 2014)
Hero / Idol
Canadian ice hockey players Brad May and Adam Mair. (Athlete, 06 Mar 2014)
Sporting philosophy / motto
"Take advantage of what you still have." (pbs.org, 24 Feb 2014)
Awards and honours
He took part in the torch relay during the opening ceremony of the 2014 Warrior Games in Colorado Springs, CO, United States of America. (teamusa.org, 16 Sep 2014)
Impairment
In 2009 he was serving with the United States [US] Marine Corps in Helmand Province, Afghanistan, when he stepped on an improvised explosive device [IED] while on a rural patrol. His injuries led to his legs being amputated above the knee and he lost the ring finger on his left hand. (Athlete, 06 Mar 2014; teamusa.org, 13 Feb 2014; homesforourtroops.org, 20 Dec 2012)