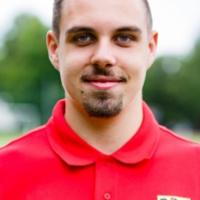 When and where did you begin this sport?
He took up Para athletics at age six.
Why this sport?
His brother was involved in athletics.
Club / Team
VfL Wolfsburg: Germany
Name of coach
Werner Morawietz [club], GER
Training Regime
He has six training sessions a week, which each last for up to two-and-a-half hours.

In 2017 he was given the Youth Prize at the Wolfsburg Citizen of the Year awards. (VfB Fallersleben Leichtathletik YouTube channel, 22 Jun 2017; vfb-fallersleben.de, 2017)

In 2013 and 2014 he was named Young Athlete of the Year at the VfB Fallersleben club in Wolfsburg, Germany. (waz-online.de, 16 Nov 2014; wolfsburger-nachrichten.de, 29 Nov 2013)
Famous relatives
His mother Haike has competed in triathlon at club level in Germany, and his father Jurgen has played handball and coached athletics at the VfB Fallersleben club in Germany. (waz-online.de, 07 Oct 2013)
Ambitions
To compete at the 2020 Paralympic Games in Tokyo. (sportbuzzer.de, 30 Jan 2020)
Impairment
He was born without the lower part of his left arm. He uses a prosthesis to assist his running. "It helps me to come out of the blocks straight and to run balanced." (ndr.de 23 Jan 2020; waz-online.de, 07 Oct 2013)
Other information
2019 WORLDS
Although he did not meet the qualifying criteria set by the German federation to compete at the 2019 World Championships in Dubai, United Arab Emirates, he was included in the squad and managed to qualify for the final of the T47 100m. "The selectors recognised how my performance had improved. I could then show in Dubai what I could do and I managed to deliver. Dubai was my first world championships with the seniors, and getting to the final was a huge experience for me. I couldn't have imagined it better. It is a big step toward regular senior-level competitions." (bsn-ev.de, 24 Jan 2020; ndr.de 23 Jan 2020)