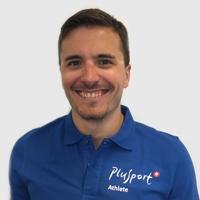 When and where did you begin this sport?
He took up the sport in 2006 in Winterthur, Switzerland.
Why this sport?
He wanted to remain active after he stopped playing football because of his impairment. He liked athletics due to the speed, thrill and excitement of pushing his limits.
Club / Team
LC Zurich: Switzerland

He had a number of problems with his foot in early 2015. The injury affected his training and performances during that year. (philipphandler.ch, 22 Jun 2015)
Sporting philosophy / motto
"One can learn so much through sport. You can set a goal, work every day and give your best in order to achieve it." (ideesport.ch, 11 Nov 2019)
Awards and honours
In 2014 he received a special achievement award from the Swiss Paralympic Committee. (swissparalympic.ch, 24 Oct 2014)
Ambitions
To compete at the 2020 Paralympic Games in Tokyo. (Facebook page, 05 Sep 2019)
Impairment
He has reduced vision due to achromatopsia. He is colour blind, his eyes are light-sensitive and his sharpness of vision is less than 10% as a result of the condition. (Facebook page, 19 Jul 2017)
Other information
OCCUPATION
He works as a performance analyst at an insurance company based in Zurich, Switzerland. (LinkedIn profile, 22 Mar 2021)

FROM THE UNITED STATES OF AMERICA TO SWITZERLAND
Born in New York, NY, United States of America, he moved to Switzerland with his family at age five. (philipphandler.ch, 22 Jun 2015)

FURTHER EDUCATION
In 2016 he completed a master's degree in banking and finance at the University of Zurich in Switzerland. (LinkedIn profile, 01 Apr 2019)