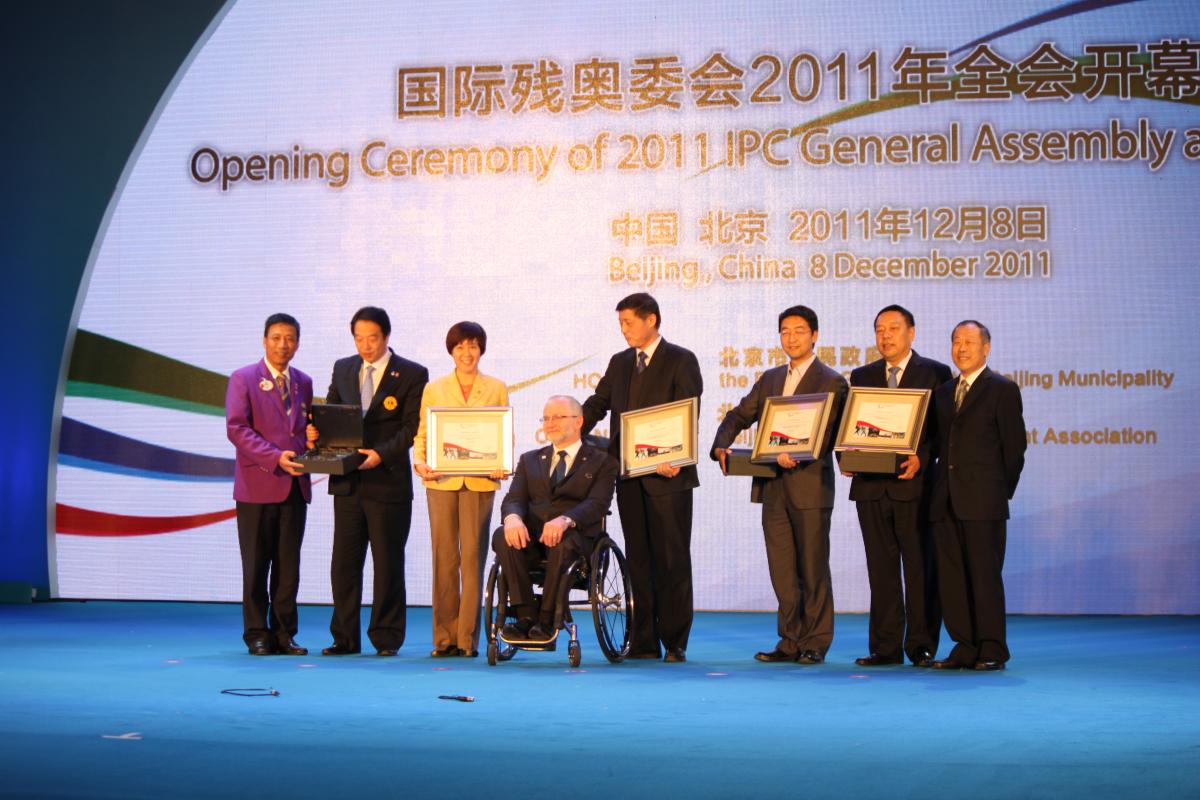 International Paralympic Committee (IPC) President Sir Philip Craven opened the 15th IPC General Assembly in Beijing, China, by saying the Paralympic Movement is in good health and that its best years are still to come.

In his speech to the members Sir Philip Craven stated that the Paralympic Movement had coped well during the global financial crisis, had continued to flourish, and was now ready for what lies ahead.

“If Beijing in 2008 marked the moment the Paralympic Movement grew up and the world took notice, then I believe the coming years will see us grow in maturity and captivate billions as our athletes continue to inspire and excite the world,” he said.

“We can feel rightly proud of our achievements so far, however, we should feel a greater sense of excitement about what we still have to achieve together.”

At the start of his 40-minute long address, Sir Philip praised the IPC Governing Board which met last weekend and was elected at the 2009 General Assembly in Kuala Lumpur, Malaysia.

He then spoke of his pride in the IPC Strategic Plan 2011-2014, before highlighting how the last two Paralympic Games underlined the need for the whole Paralympic Movement to work together in increasing participation at all levels across the globe.

“The Beijing Paralympic Games had a record 3,951 athletes, however more than half came from just 11 of the 146 competing countries,” he pointed out.

“In Vancouver, despite a record 502 athletes taking part in 64 medal events, it averaged out at less than eight competitors per event.”

In reviewing the Vancouver 2010 Paralympic Winter Games, he described them as the biggest and best Winter Paralympics ever, before he looked ahead to the next four editions of the Paralympic Games.

Sir Philip Craven said: “The signs are that London 2012 has the potential to match and potentially surpass what we achieved here in Beijing.

“More than one million tickets have already been sold for the Games, a record so far away from the Opening Ceremony.

“The job now is to sell the remaining tickets before the Games. It would give us all great pleasure if we could announce for the first time ever that the Paralympic Games are a sell-out weeks in advance.

“Already in Sochi we are seeing some significant changes taking place in Russian society. The work they have undertaken in creating a barrier free law in Russia is a significant step for which they are to be congratulated.”

He described the newly unveiled Rio 2016 Paralympic Games emblem as “beautiful, and the best yet,” and spoke of his delight that all three cities bidding for the 2018 Paralympic Winter Games, which were awarded to PyeongChang, had made the Paralympics integral to the success of their bids.

Thanks to six new National Paralympic Committees in the last two years, together with three new International Federations, he said the IPC now has 192 members and that more sport is being played now than ever before.

“The Movement is now bursting with sports,” said Sir Philip. “This year alone, despite there being no Paralympic Games, at least one major international or regional sporting event has taken place every two weeks.”

The IPC President since 2001 also discussed the IPC’s ongoing relationship with the International Olympic Committee and the IPC’s desire to secure a deeper and broader partnership with them.

He said: “Without the IOC’s support, the IPC would not enjoy the position in which we find ourselves today. We are all grateful to the IOC and its President Jacques Rogge, as well as his predecessor, the late President Juan Antonio Samaranch, for their continued support of the IPC and the Paralympic Games.

“Complex, but extremely positive negotiations, have been ongoing for a number of months and our aim is to finalise an agreement in the near future.”

Volunteers, officials, classifiers, members as well as the IPC’s staff at its headquarters in Bonn, Germany, were also credited for their efforts in the last two years.

“We have a dynamic team capable of taking the IPC and the Paralympic Movement to the next level of our exponential growth,” he commented.

The IPC General Assembly is the supreme governing body of the International Paralympic Committee (IPC). It determines policy for, and sets the fundamental directions for the development of sports for athletes with an impairment. It will continue Sunday (11 December), when it will conclude nine days of activity in the city that staged the best ever Paralympic Games in 2008.