"We have to build on the momentum generated last summer and although a Paralympic Games is a different size and scale altogether from a World Championships, it is vital that organisers in Montreal build on the success of London and do not take a step back."

With Saturday (4 May) marking 100 days to go until the 2013 IPC Swimming World Championships in Montreal, Canada, International Paralympic Committee (IPC) President Sir Philip Craven has called on event organisers to ensure they build on the success of London 2012.

At last summer’s Paralympics over 250,000 tickets were sold for 10 days of competition which involved 604 swimmers from 74 countries. Athletes broke 148 world records, raised their profile to new levels and helped to change perceptions and attitudes with their scintillating performances.

Sir Philip Craven, said: “We have to build on the momentum generated last summer and although a Paralympic Games is a different size and scale altogether from a World Championships, it is vital that organisers in Montreal build on the success of London and do not take a step back.

“By success I mean organising a fantastic competition for athletes, lots of promotion and marketing in advance resulting in the venue being full each day and widespread media coverage in Canada and around the world.

“Many of the athletes are household names in their respective countries after London. It is important that the media has to the opportunity to tell their story in between Paralympic Games, and the easiest way to achieve this is through global TV coverage of the World Championships.

“The 2010 World Championships in Eindhoven, the Netherlands were tremendous and if event organisers in Canada can replicate the enthusiasm we benefitted from three years ago then Montreal will be a stunning success.”

The 2013 IPC Swimming World Championships will take place at Montreal’s Parc Jean Drapeau Aquatic Complex, a venue to the east of the city with a rich history for staging major international and national swimming competitions between 12 and 18 August 2013. Around 650 of the world’s best swimmers from 60 countries are expected to attend.

This week Great Britain announced a 32 strong team for Montreal that will include four-time Paralympic champion Ellie Simmonds and 12-time Paralympic medallist Sascha Kindred. Simmonds was only 12 when she competed at her first World Championships in Durban, and now, at 18, is returning for her third.

In Montreal Simmonds will face her arch rival Victoria Arlen who was named in April as part of the 25 strong USA team heading to Canada. In London the two went head-to-head in three finals with the American finishing ahead of her British nemesis on two occasions.

Other big names expected to line-up in Montreal include Brazil’s Daniel Dias, a winner of six gold medals all in world record times at London 2012, USA’s 12-time Paralympic champion Jessica Long and the Australian duo of Matthew Cowdrey and Jacqueline Freney who, between them, amassed 12 gold medals in London last summer.

One of Canada’s most decorated swimmers and flag bearer at the London 2012 Closing Ceremony, Benoit Huot - a winner of 22 World Championships and 19 Paralympic medals - is expected to star for the host nation as is Summer Mortimer a winner of two golds in London. 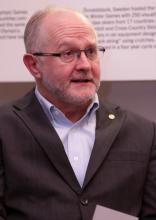