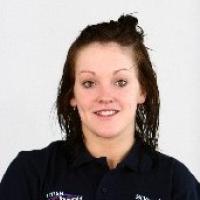 Nicknames
Rach (britishswimming.org, 27 Jan 2010)
Memorable sporting achievement
Swimming the butterfly leg and helping Great Britain win a silver medal in the 4x100m medley relay at the 2006 World Championships in Durban, South Africa. (britishswimming.org, 27 Jan 2010)
Most influential person in career
Her coach, Tony McGrail. (britishswimming.org, 27 Jan 2010)
Injuries
She tore a shoulder muscle in 2007, which prevented her from using the arm for three months and caused her to switch her focus from butterfly to backstroke in the lead up to the 2008 Paralympic Games in Beijing. (Daily Mail, 8 Sep 2008)
Other information
RETIRED
The injury she suffered before the 2008 Paralympic Games in Beijing forced her to retire and concentrate on her sport development degree. (paralympiansclub.org.uk, 27 May 2011)