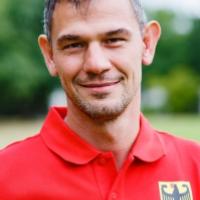 When and where did you begin this sport?
He took up athletics at age 13, having found his previous sport of swimming too monotonous.
Why this sport?
After moving to a new school, he was teased by other children because of his impairment. The sport helped him to gain self-confidence and accept his amputation.
Club / Team
Rot-Weiss Koblenz [GER] / VfL Eintracht Hannover [GER]:
Name of coach
Willi Gernemann [national], GER

Injuries
In 2018 he suffered from a back injury but recovered in time to compete at the start of the outdoor season. (Facebook page, 06 May 2018)

He missed the 2016 World Championships in Doha, Qatar, due to an injury. (vfl-eintracht-hannover.de, 11 Nov 2015)
Sporting philosophy / motto
''No medals without hard work.'' (reinhold-boetzel.de, 2016)
Awards and honours
He was voted Sportsman of the Year in the Nienburg/Weser region of Germany, by readers of newspaper Die Harke six times between 1995 and 2003. (dieharke.de, 2013)

In 2011 he was included in the Hall of Fame of the Niedersachsische Institut fur Sportgeschichte [Lower Saxony Institute for Sports History]. (reinhold-boetzel.de, 2017)