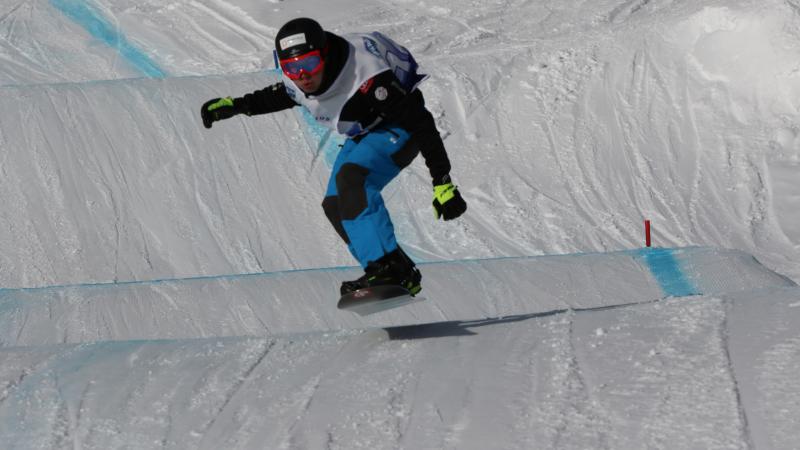 Reinhold Schett just missed out on his first career Paralympic medal at the PyeongChang 2018 Games. He went head-to-head with the USA’s Noah Elliott in the snowboard-cross bronze medal race but could not hold on.

On his World Championships debut in 2017, Schett claimed silver and bronze in the snowboard-cross and banked slalom respectively. Top three finishes in both World Cup disciplines in the overall rankings also gave the Austrian a boost.

He burst onto the international scene in 2015-16, claiming his first World Cup victory in the men´s SB-LL1 in Big White, Canada, and finishing second in both the snowboard-cross and the banked slalom behind Dutch sensation Chris Vos.

Schett took up the sport at 13-years-old and, despite a serious accident in 2000, he has never abandoned it.

The snowboarder has an L1 incomplete paraplegia and can be seen playing wheelchair basketball or riding his bike when the snow melts and he cannot practice on the slopes.

When and where did you begin this sport?
He began snowboarding in 1996. He took up Para snowboard in 2001, a year after his accident.
Why this sport?
He enjoyed spending time with friends in the mountains and feeling a sense of freedom while on the slopes. He was also inspired by Austrian snowboarder Stefan Gimpl. "Before I had my accident I was watching the Air and Style in Innsbruck. It was the first time Stefan Gimpl won the Air and Style and the first time ever the competition was won by an Austrian rider. I was so impressed by his jumps and atmosphere in the stadium. This was the moment I decided I wanted to get better in snowboarding and jumping and I started to participate in some smaller 'Big Air' events."
Club / Team
Sportunion Villgratental: Austria
Name of coach
Jean-Claude Keipes [national]