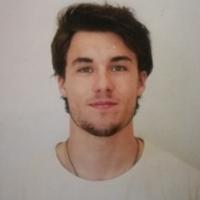 When and where did you begin this sport?
He took up Para alpine skiing during the 2015/16 season in San Vito di Cadore, Italy.
Why this sport?
He began practising alpine skiing at a younger age. After his accident he tried Para powerlifting and Para athletics before returning to his first passion. "It has been my passion since I was young. From the moment I had my accident I always wanted to try skiing again, even though my accident happened on the slopes."
Club / Team
Polisportiva Caprioli: Cortina d'Ampezzo, ITA
Name of coach
Luca Lacedelli [personal]; Davide Gros [national], ITA

Hobbies
Athletics, working out. (comitatoparalimpico.it, 08 Feb 2018)
Memorable sporting achievement
Winning his first World Cup race, the sitting giant slalom at the 2020 World Cup event in Veysonnaz, Switzerland. (amicodelpopolo.it, 11 Jan 2020)
Most influential person in career
His father. (comitatoparalimpico.it, 08 Feb 2018)
Sporting philosophy / motto
"Nobody hits you quite as hard as life does, and if life knocks you down you need to have the strengthen to get up again." (SHRED YouTube Channel, 28 Feb 2018)
Awards and honours
In 2019 he was named Athlete of the Year by Sci Club Druscie in Cortina d'Ampezzo, Italy. (sciaremag.it, 30 Dec 2019)

He was named the 2015 Sportsman of Year by the Polisportiva Caprioli club in San Vito di Cadore, Italy. (corrierealpi.gelocal.it, 16 Nov 2015)
Other sports
He has represented Italy in Para athletics, competing in the F55 javelin throw at the 2016 European Championships in Grosseto, Italy. (SportsDeskOnline. 25 Jan 2019; paralympic.org, 13 Jun 2016)
Impairment
In December 2013 he sustained severe spinal injuries in a skiing accident in Alleghe, Italy. He veered off course, crashing at speed into the trees. (IPC, 10 Feb 2018; corrierealpi.gelocal.it, 08 Apr 2015, 23 Dec 2013; ilgazzettino.it, 22 Jan 2015)