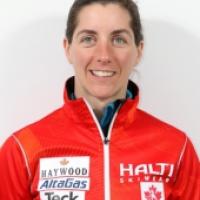 When and where did you begin this sport?
She took up para-cycling in 2010.
Why this sport?
After competing at the 2010 Paralympic Winter Games in Vancouver she followed up on an invitation from a national cycling coach to try out for the tandem cycling team. "I was 35 and I was up for the challenge, but I told Cycling Canada to be honest with me, if I have talent. I did the tests at a week-long training camp. They told me I had great potential."
Name of coach
Sebastien Travers [national], CAN