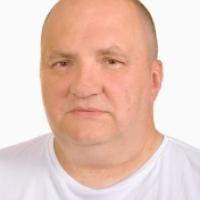 When and where did you begin this sport?
He took up the sport in 1999 at the START Koszalin club in Poland.
Why this sport?
"Sport is the best form of rehabilitation. It's another way to overcome our own limitations and difficulties."
Club / Team
START Koszalin: Poland
Name of coach
Adrian Mikolajczyk [club], POL

Injury affected his performance at the 2015 World Championships in Doha, Qatar. (szczecin.tvp.pl, 13 Nov 2015)
Awards and honours
In 2017 he received the Silver Cross of Merit from the President of Poland. (prezydent.pl, 03 Dec 2017)

He was named the 2015 Best Para Athlete in Koszalin, Poland. (koszalin.pl, 07 Mar 2016)
Impairment
He has muscle weakness in both legs as the result of a motorcycle accident. (Athlete, 17 Jul 2017; przegladsportowy.pl, 06 Sep 2016)
Other information
CLASSIFICATION PROBLEMS
Despite initially winning the F51 discus at the 2000 Paralympic Games in Sydney, he was disqualified following a medical examination related to his classification after he had already received his gold medal. He chose not to compete from mid 2002 to 2013, as he was unable to compete as an F52 classified athlete. In 2013 he was granted F52 classification and returned to competition. "I couldn't compete in my category, so I chose my wife, family, kids and work instead. I followed my colleagues' results but as soon as I watched the discus throw at the Paralympic Games, all the bad memories came back and I just couldn't stand that. I wanted to take part in competitions so badly, but I knew there was no chance for me to compete in my right class. But then they changed the rules, and I returned when I could compete in my actual category." (myinfo.rio2016.com, 08 Sep 2016; przegladsportowy.pl, 06 Sep 2016)