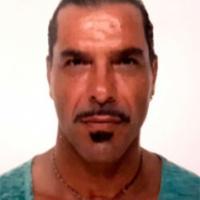 When and where did you begin this sport?
He took up Para athletics at age 30.
Why this sport?
He was inspired to try the sport after watching the 1996 Paralympic Games in Atlanta on television, and seeing US sprinter Tony Volpentest win gold in the T43-44 100m.
Club / Team
GSH Pegaso: Asti, ITA
Training Regime
He trains for three to four hours a day.

He suffered an Achilles tendon injury in 2008, which affected his performance at the 2008 Paralympic Games in Beijing. (sionomagazine.com, 03 Jul 2009)
Sporting philosophy / motto
"Anything that happens is temporary. There is no need to get stuck in adversity. After a terrible night, when the sun is coming up, I raise my face, I breathe, and I react. I will find a solution." (Voi Settimanale, 03 Sep 2020)
Ambitions
To compete at the 2020 Paralympic Games in Tokyo. (Ability Channel YouTube channel, 13 Oct 2020)
Impairment
He was involved in a motorcycle accident in 1985. The incident resulted in the amputation of his right leg below the knee. "The last thing I remember is screaming in the hospital, I could only see bones and muscles outside [the skin]. I took a doctor by the arm and held him so tightly that he had to anaesthetise me. I woke up 36 hours later." (fanpage.it, 29 Jan 2020; abilitychannel.tv, 16 Jun 2016; articolo21.org, 07 Jan 2016)
Other information
DANCING
He was a professional dancer before his accident. He and his wife ran a dance school, where he taught for four years. "My father took me to ballroom since I was age four, he tells me. With my sister I have won everything. They amputated my leg when I was 18. I was a professional dancer, then I was reborn thanks to athletics." (fanpage.it, 29 Jan 2020; iogiocopulito.it, 25 Feb 2019; articolo21.org, 07 Jan 2016; Voi Settimanale, 03 Sep 2020)

AGE NO BARRIER
He will be age 54 when the 2020 Paralympic Games in Tokyo take place. In 2020 he said he had no immediate plans to retire from the sport. "I know that sooner or later that moment [when he retires] will come and I know it will be like losing my leg a second time. But for now I like to keep improving. When I stop doing that, I will start thinking about it." (fanpage.it, 29 Jan 2020)

SANCTION
He was suspended from competitive athletics for two years after he tested positive for the prohibited substance stanozolol at the 2010 IWAS European Open Championships in Stadskanaal, Netherlands. He appealed to the Court of Arbitration for Sport [CAS] but saw his ban upheld and he served his full suspension. He returned to competition in July 2012. (alessandrianews.it, 29 Aug 2012; superabile.it, 20 Jul 2012; paralympic.org, 20 Nov 2010; iwasf.com, 02 May 2011)