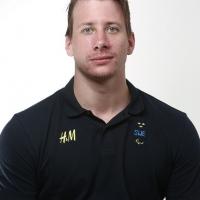 In 2017 he was diagnosed with sepsis in his right foot. He was sidelined for three months. (parasport.nu, 02 Jan 2018)
Other sports
He competed in wheelchair basketball at the 2008 Paralympic Games in Beijing. He has also played wheelchair floorball at international level. (op.se, 18 Mar 2015; SportsDeskOnline, 17 Sep 2008)
Impairment
He was born with spina bifida and has paraplegia. (Athlete, 06 Mar 2018)
Other information
UNLUCKY YEAR
His participation at the 2018 Paralympic Winter Games in Pyeongchang was in serious doubt after he was diagnosed with blood poisoning in his right foot in mid-2017. He was out of action for three months, but then sustained a concussion when he returned to the ice after he was hit in the head by a puck. He recovered in time to compete at the Pyeonchang2018 Qualification Tournament in Ostersund, Sweden, where he broke some ribs in a tackle. Despite all of his injury problems, he was still able to compete at the Games in Pyeongchang. "The doctor said I was lucky to be alive [after he was diagnosed with blood poisoning]. I probably never realised how serious it was. I was bedridden almost the entire period, and at that point the Paralympics felt extremely far away." (paralympics.se, 02 Mar 2018)