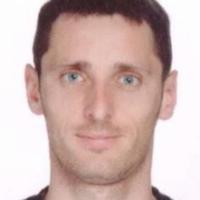 When and where did you begin this sport?
He took up the sport in 2000 in Lviv, Ukraine.
Why this sport?
He was regularly sick as a child, but sport helped to strengthen him and keep the illnesses away. As a child, doctors suggested that he play tennis to develop his hands. But, after a year, the doctors decided that tennis was too monotonous and was only developing certain muscles, so he switched to athletics.
Club / Team
Invasport: Lviv, UKR
Name of coach
Oleg Leshchyshyn [personal], UKR